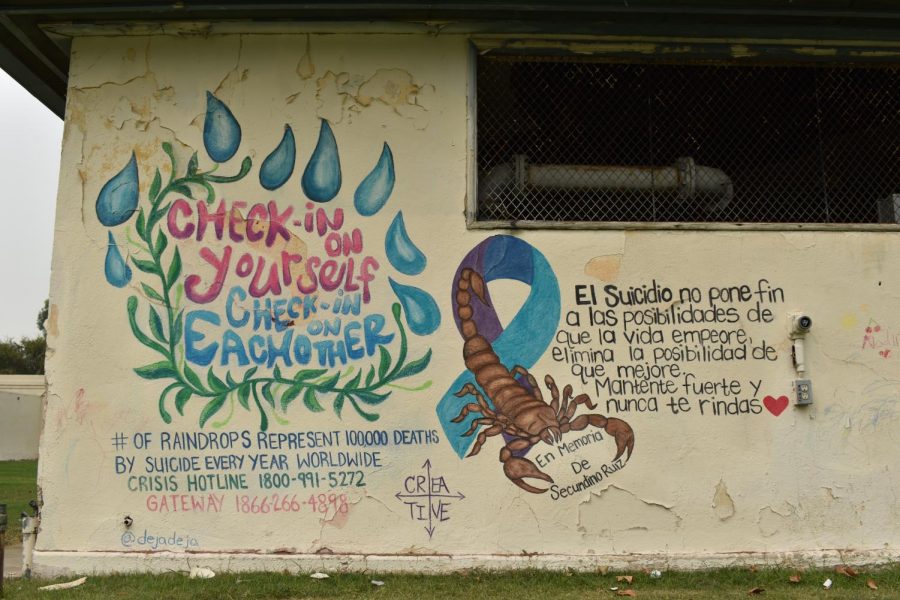 Through Sept. 11 to 13, Kern County Behavioral Health and Recovery Services hosted a Chalk Walk Scavenger Hunt along with an art group known as Creative Crossings for the community.
The purpose of the event was to get a message across to the community through forms of art.
The event touched on the topic of suicide and substance abuse. Through different creative murals, artists gave numbers, quotes, and visual ways to seek help.
Eric Tap, an artist that created a mural along the wall next to City Smog. The message in his mural was to “Stay Strong.” The location of his mural was placed near a busy street and very accessible to the people around the neighborhood.
“We are trying to reach out to as many people as we can because we are living in hard times nowadays,” Tap said.
On his mural, Tap placed the number for the crisis hotline. He has a personal connection with this piece and wanted to make sure that the community knows that there are people willing to help.
“Not everyone has that person that can tell the ‘good job’ or ‘everything will be okay’, so with me putting that on the wall I’m trying to say to be strong,” Tap explained.
Another mural at the 7-Eleven on Chester Lane was created by Jennifer Jaime.
The message within her mural was light versus darkness. Jaime describes that the darkness represents the low times in life. She said that the light that can be seen in her mural represents a person, place, or belief that brings one out of the darkness. Jamie also shared a personal connection to the purpose of her mural.
“I feel like I was set up to fail from the beginning like so many others who grow up in poverty and broken homes,” Jamie explained. “The one thing is, I never stay down for long.”
Hugo Gonzalez created a piece on the sidewall of 7- Eleven as well. The purpose of his mural was to give you direct information on where to contact. On his mural there are two highlighted numbers; one for the suicide prevention hotline and the other the gateway crisis hotline. There are two colors incorporated in the mural. Gonzalez explained that the colors represent the suicide awareness ribbon but he added his own twist.
“I went with a more magenta/pink tone that to me represents love and the green with blue is to represent the world we live in,” Gonzalez described. “If I can put a smile on at least one person or help them through there day it’s all worth it to me.”
Every piece created had direct information to hotlines in order to help those that may need help recovering or just need to be heard.