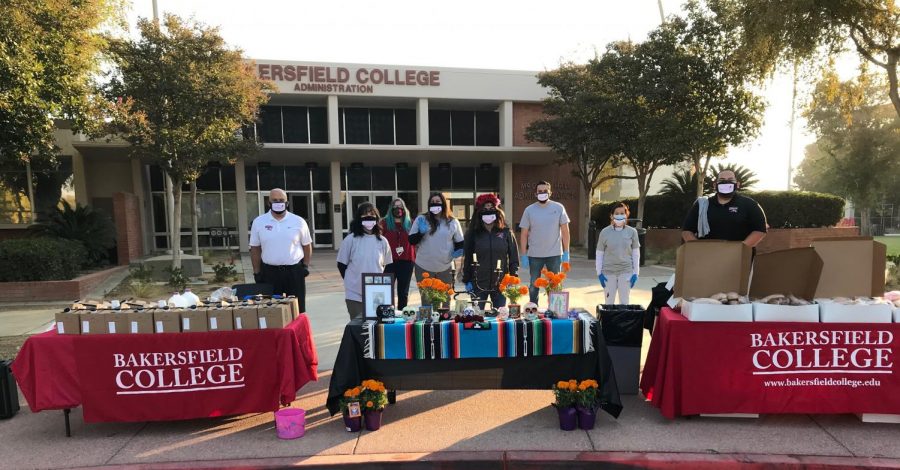 The Padrinos de Bakersfield College hosted a Dia de Muertos celebration, curbside event at BC’s main campus. This event was on Oct. 30 where they had given out free coffee and sweet bread for those who stopped by the Administration office.
Executive Director of BC’s Abel Guzman and co-leader for the Padrinos de Bakersfield College said the group was started years ago by BC’s recently retired dean of Instruction, Corny Rodriguez, to support BC’s Latino staff and students on campus.
“Now that [Rodriguez] has retried we want keep his legacy going and this [event] is the pick-up,” Guzman said.
Guzman said Padrinos de Bakersfield College is the first event for Dia de Muertos and will announce more virtual events soon.
According to the Padrinos de Bakersfield College Instagram, they are “committed to the success and professional development of our Latinx students and personnel.” This organization has been around at BC before, but it is making a comeback to re-establish itself to help the community.
This event took place between 8-10 am, the day before Halloween, and with some of the COVID-19 restrictions many of the faculty and staff present were wearing “Padrinos de Bakersfield College” face masks and shirts. At the curbside they were giving out free café and pan dulce, the coffee was from Starbucks and they were also handing out many traditional Mexican sweet breads like conchas and puerquitos.
At the event, those involved with the organization had set up a traditional Dia de Muertos altar. Where they place certain objects and items that have belong to a family who have died to honor them with things like old photos, or personal belongings. The Dia de Muertos is always on Nov. 2 and is majorly celebrated throughout Mexico, the same way Halloween is a big deal here in the United States.
Every altar is different because it is up to the family to decide how they choose to be creative setting it up. One of the many traditional items’ altars have are the “Marigolds” which they had placed around at the event. This is a type of flower that is bright orange and can sometimes be referred to as “flowers of the dead” because in Mexico it is believed that these flowers attract the souls of those who have died.
Another traditional item is the “Catrina” which is a fake skeleton dressed up in colorful clothes with painted skulls and sometimes fancy hats or flower crowns. These altars have been associated with Mexican, Hispanic, and Latino cultures for generations because the Dia de Muertos is a celebration that honors the memories of loved ones.