BC will present a virtual play production “Love and Information” 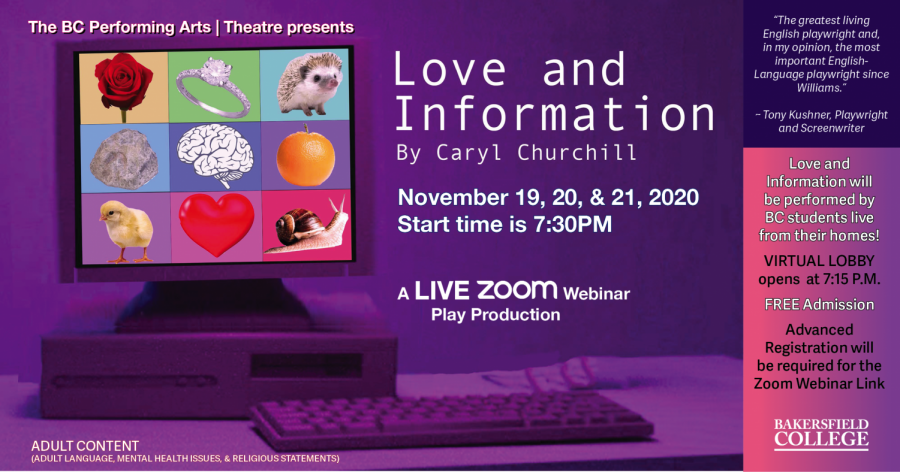 Since COVID-19 made its appearance in the U.S., theatre performances have been scarce. Broadway shut down, many films stopped production, and students all over the county were not able to perform since March. Nonetheless, BC’s production director Kimberly Chin still found a way to let the show go on.
This year, Chin’s “Love and Information” written by Caryl Churchill has decided to hold all performances over Zoom.
“If I want to do a play this semester and I want to keep my students safe, then let’s do a live Zoom play,” said Chin.
Chin also states the reason why she chose this play to perform over Zoom. “In this, she talks about our society today and being in our virtual world.”
Directing a play over Zoom will obviously have problems and change up the auditioning process a bit, Chin shared. “I love doing some type or theatre or improv game, so it was a little lacking there,” Chin stated. She held the auditions over Zoom and had a great turn out.
Students from Bakersfield College such as Zariyah Hall, Cecilia Esquivel, and Yaquelin Gomez have been a part of the process of the play as actors.
All the actors said they have had challenges while rehearsing over Zoom.
“I think the hardest part was the lighting and having to be our own tech crew,” Esquivel counited. “I think my favorite part was doing something that has not been done by BC before or by many other theaters. This pandemic has made us have to adapt to new norms and I like that we are still producing art through these difficult times.”
He also said the audience should expect many relatable scenes while watching the show. “If they come with an open mind, they should expect nothing but a fun time.” Gomez states. Esquivel adds “They should expect to connect with the show, because the stories are relatable and real.”
The show contains many characters and many different scenes played by these actors. “I play a variety of different characters who have quite a few differences from each other. Like one of them is a bit of an overthinker while another is a mother who is trying to get the hang of motherhood. Each character I play has a certain level of quirkiness to them,” said Hall.
Opening night of “Love and Information” is on Nov. 19 and the show will start at 7:30. “Love and Information” contains adult content. You can register for a performance by visiting the Bakersfield College website. Admission is free and will last three nights.