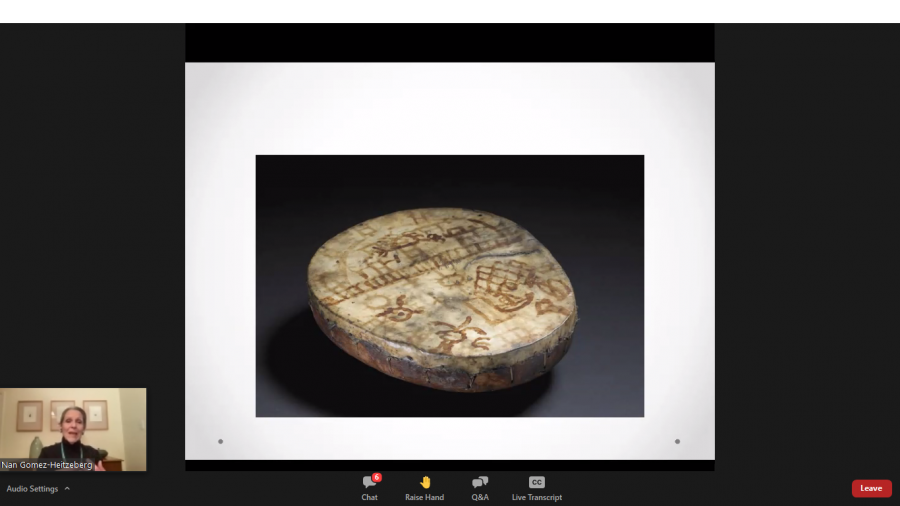 “Shamanism: The Spirit of Story, Structure, and Symbols” on March 2, Professor Nan Gomez-Heitzeberg detailed specifics of a shaman drum made of reindeer hide, wood, and inks used to make symbols letting a shaman go between the two worlds. A shaman’s “traveling back and forth and getting information for the betterment of everyone, that seems to be true across cultures,” she explains.

Professor Wrest surmised the four academic perspectives when he offered insight established when he was researching ancestral Puebloans. Explaining how there was “a very Eurocentric 200 years of archeology, not just in that part of the world, but in many parts of the non-western world, and these people made all of these archeological claims and findings that are very scientific in some cases, […] but without that indigenous knowledge, or that indigenous perspective, I think there’s absolutely something missing in the whole story.”

Professor Kumelos defined Shamanism out of respect to its cultural and mythological roots. She walked webinar attendees through understanding the belief system behind Shamanism, the concept that spans all cultures, the idea that shamans have unique access to “the web of life,” as she refers to it.

Early in her presentation Professor Kumelos established a baseline for those unfamiliar with the basic aspects of Shamanism: a shaman has animal spirit guides to help them through the other world as the shaman searches for wisdom and medicine for their people, and rainbows act as a bridge to another world.

A common thread exists within American mythos that ties it to Shamanism, using the titular character of ‘Cinderella’, Professor Kumelos theorizes. She posed the hypothetical, “Can we make a case she’s a shaman as well, dancing between the realm and rainbow glass and animal partners?”

Following was Professor Gomez-Heitzeberg, who gave a thorough presentation on historical shaman artifacts, and one artist in particular who held seances to commune with spirits who guided her in her art. Gomez-Heitzeberg lectured on the woman, born in Sweden in 1862, named Hilma af Klint, whose paintings, according to Gomez-Heitzeberg, “precedes the abstract of the non-representation work.” Af Klint specified her work could only be displayed posthumously, in a temple with a spiral that travels up the tower, and is now exhibited in the Guggenheim.

Professor Moreland offered an anthropological angle on the subject. Early shamans used their supernatural ability to reduce worry in their community by using their connection with nature to ease hardships; performing rituals for natural occurrences such as rain, summoning animals to hunt, even looking to the future to see who would win in battle.

She defined the significant distinction between early and contemporary Shamanism. Moreland says about the former, “[many] never used Shamanism to make good things happen, they just used Shamanism to keep bad things from happening.” As opposed to modern Shamanism, which she said “reflects more of the first world global ideas, it’s more about making good things happen, about getting rid of illnesses of course, but about getting a better job, finding love, making money, it’s a little more about making things better and improving life”

Professor Wrest presented on shaman kivas, structures built by Native American Puebloans into the ground made for a communal, spiritual experience. Professor Wrest emphasizes the importance of maintaining the historical sites he analyzed, explaining that indigenous populations today have a connection to these sites through their ancestry.

Additionally, he weighed in on how people could use Shamanism to reconnect post-COVID-19, referencing the Navaho Nation’s strategy to keep their community thriving, by “ensuring that they got their elders who wanted the vaccine as soon as possible so they can preserve as much of their culture, and oral history—and history generally.”