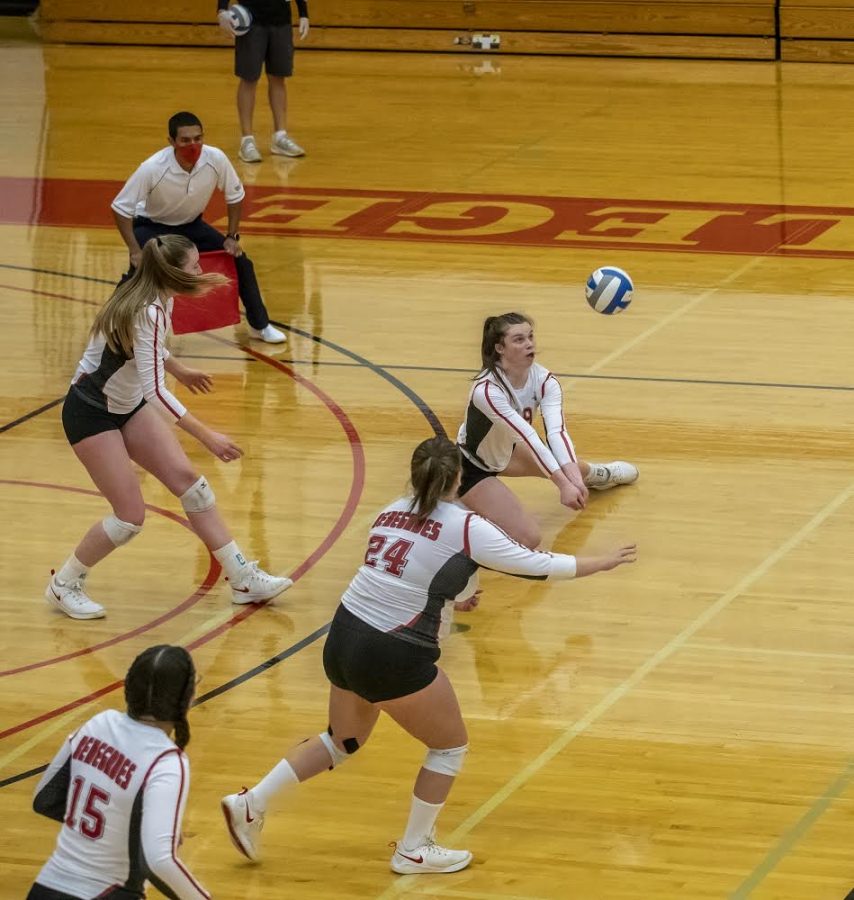 Bakersfield College volleyball played Cuesta College at home where #19 Alyson Dees was captured making a dig for her team on March 31.

The Bakersfield College volleyball team hosted Cuesta College and defeated them in all three sets making the match on March 31 a score of 0-3. This match being the last game streamed of the season and the Renegades ended by having won every game 9-0, seven 3-0 match sweeps, and only having had lost 2 sets the entire spring season.

The renegades tallied a total of 39 kills against the cougars. The games leaders for the Renegades were #22 Emily Clark, #19 Alyson Dees, and #16 Yuliana Rivera, all of whom have played every match this season. In the first set, The Renegades started strong but had to regain the lead to clinch the set with a score of 25-20. The second set was a heated battle as both teams fought back and forth for points, but the Renegades eventually came out on top with a score of 25-22. In the third and final set, the Cougars brought the heat from the beginning trying to win the set and were at first leading with more points however the Renegades weren’t about to let their winning streak come to an end, and they were able to regain the lead and finish the set with a score of 25-20.

Clark had this to say about the game on March 31, “Cuesta was a competitive team to play against this season, and they’re not usually one of the teams in our conference. Being able to compete against a team that none of our athletes have played against in their time at BC was definitely fun. Cuesta was playing all out, and they kept some really good rallies going.”

When asked how she thought the team played this spring season Clark said, “I think our team played phenomenal this season! We had a lot of sophomores who took on internal leadership roles, and a lot of freshmen who really stepped up to the plate when it came to competing and devoting yourself to the program. It was a super short season, so I think we still had a lot more room left to grow as a team, but we were able to compete like we had been playing together for a long time. I’m extremely proud of all of the girls on the team, and how devoted they were. We weren’t guaranteed a season when we started and it’s amazing to see how we finished it.”

COVID-19 has posed many issues for everyone and this is what Clark has to say about the challenges her team faced,”We had to be super adaptable, because plans could change day by day. There was never really certainty of how the planned season would play out at all, and I think our team took what was given and found some way to be grateful for it.”

Although the indoor season is over there is still much to look forward to for this team in the future,”We start sand soon, and we are all very excited about it! It is very different than indoor, but we’re going to carry over the basics and hopefully being able to compete just as well as we did with indoor. We have some athletes who are very  familiar with sand, and some who have never played before, so we are super excited to get to training, and see where it takes us,” said Clark.

To keep up with all the sports teams at BC you can go to the Bakersfield College Athletics website www.gogades.com.