Attorney and co-founder of the Innocence Project, Barry Scheck, speaks for BC webinar 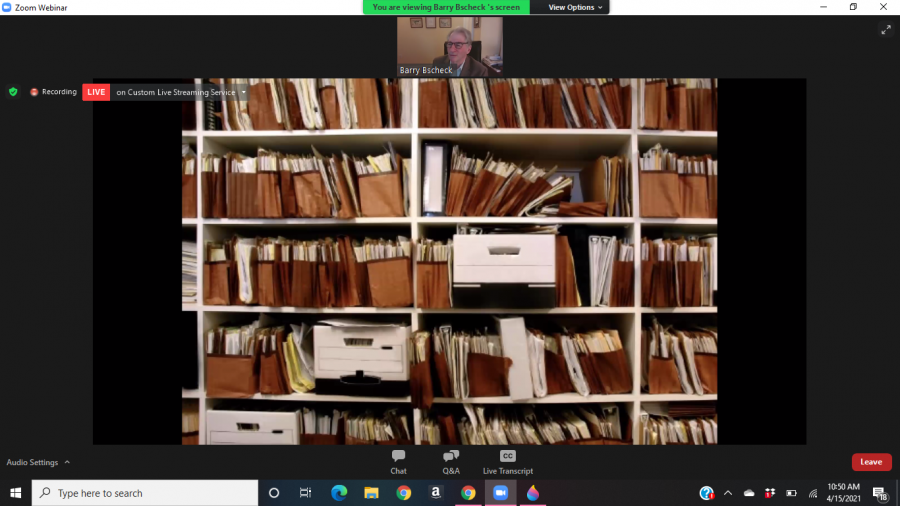 Bakersfield College hosted attorney and co-founder of the Innocence Project Barry Scheck via webinar on April 15, depicted showing a photo of what he described "most lawyer's offices looked like before the digital case," as he presented on modernizing civil and criminal trials with the use of forensic science.

Bakersfield College hosted a webinar on April 15 in its Distinguished Speaker series for attorney Barry Scheck to speak on the Innocence Project which he co-founded in 1992 originally as a clinical program with his partner Peter Neufeld.

Levan Center Director and philosophy professor Reggie Williams introduced Scheck, he described the attorney as “one of the one hundred most influential attorneys in the United States” for his work which altered the use of DNA as well as other forms of scientific evidence in both civil and criminal trials.

Reggie Williams cited the nonprofit as having released “as many as 375 wrongfully convicted persons have been released and paid restitution,” and stated that many were saved from death row.

Scheck spoke at length about the history of the Innocence Project and its mission to exonerate wrongfully convicted people. He elaborated within his presentation, “every legal system, adversary or inquisitional, should recognize a post-conviction right to prove actual innocence and have a viable process in place to provide such relief.”

The beginning of the Innocence Project begins with Archie Williams. Archie Williams was serving a life sentence after being convicted of sexual assaults that occurred in 1982 but that he did not commit. Due to the circumstances of the case surrounding important figures within the community, his case was being ignored. Archie Williams wrote a letter requesting help to Scheck who received it in 1995, “if I could get a DNA test it would prove my innocence,” Archie Williams wrote.

For years Scheck struggled to enter Archie Williams’ fingerprints in the Automatic Fingerprint Identification System (AFIS) and was finally able to do so in 2019, leading to Archie Williams being released once the prints proved that he did not commit the crimes.

Scheck summarized a 2009 report made by the National Academy of Science on the subject of forensic science that stated the only true forensic evidence comes from testing DNA.

“Neufeld and I were just very lucky that we happened to get involved and take an interest very early on in the transfer of DNA technology from medical and research applications to the criminal legal system,” Scheck said.

Additionally, he discussed the evidence used in the Derek Chauvin case, “the scientific evidence that they put on in this case hopefully is going to be taken up across the country, there should be none of these excited delirium defenses that succeed […] and it should really dramatically change the way that police officers are trained in this country,” Scheck said.

Scheck also referenced legislation being introduced that would help the civil rights work the organization handles, such as Assembly Bill 760 introduced by Assemblyman Tom Lackey R-Palmdale which would allow authorization for AFIS in the state of California. Scheck stated that AFIS freed Archie Williams, but is currently only authorized in six states.

He also explained the George Floyd Act, which seeks to create a National Police Conduct Database that would record police misconduct on a state by state basis and to create a wholly unique license for individual members of law enforcement that would more easily identify police officers in a way that badge numbers do not allow.

“It’s very hard to keep track of police, and you can’t manage what you can’t measure,” Scheck stated.

He explained California’s Senate Bill 2 introduced by Senators Atkins and Bradford to make an oversight board to “review all allegations and adjudications of misconduct of police officers, keep track of it, and if necessary, pull their licenses. This bill will provide of course for due process for appearances before administrative law judges and appeals.”

To a question concerning if the Innocence Project’s work unsteadies the ground the justice system sits upon, Scheck answered “Of course, […] we’ve had enormous support from the police. So you want to reform these practices of particular note. For example, we now have videotaping interrogation in most states in the federal government but what the science has shown is that there shouldn’t be deception used.”