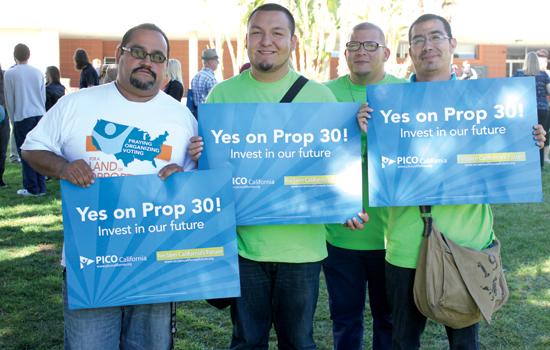 An informational rally was held in the free speech area on Oct. 25 to discuss the affects Proposition 30 would have on Bakersfield College.

Speakers urged students to vote yes on the proposition, as it would mean a loss of funds this college would need to operate going into next year if it fails.

“If Proposition 30 does not pass, BC will be facing severe financial difficulties, which may result in programs being cut, professors being laid off, and fewer students being able to enroll in class,” said student government president Danitza Romo.

“We are working tirelessly to pass this proposition,” said Landeros. “We want everybody to have the opportunity.

“We need to make this proposition pass if we want to make social change.”

Performing Arts Department chair John Gerhold discussed the confusion some voters have on the competing initiatives on the ballot.

“If Prop. 30 and Prop. 38 were to pass, only one of them could be enacted,” Gerhold said. “However, it’s also important to note that Prop. 30 is the only one of the two ballet initiatives that can, by statute, provide support to higher education, which means if Prop. 38 beats out Prop. 30, the funds that it raises would stay with K-12 and Pre-K education, and the budget cuts that are looming for higher education would happen anyway, even though people were paying more in taxes.

“So it is essential that people be aware of that relationship and vote accordingly.”

“I know firsthand that this proposition is vital and the outcome of this election is important,” he said.

“If Proposition 30 fails, it would equate to a loss of 12 million dollars [to the] Bakersfield city school district. That’s about 6 percent of our budget.

“We have to deal with the reality that’s before us.

“We have to talk to our friends and our fellow students and all of the people in our churches, and our neighbors, we have to talk to them about the reality of our state, and what’s about to happen, what’s inevitable, if Proposition 30 fails.”