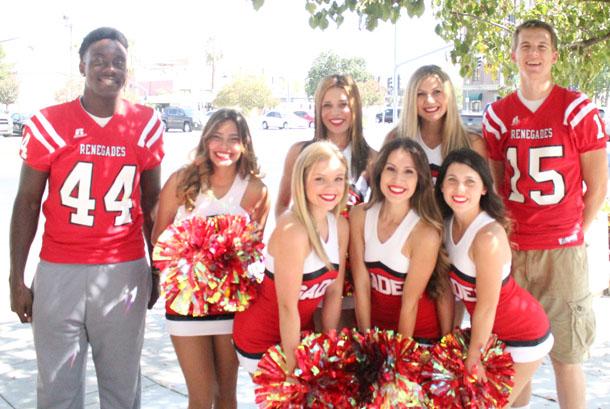 If you happened to be in the area of H Street lately, you may have noticed a few improvements surrounding the one-acre Kern Federal Credit Union lot.

The credit union has been partnering with the city as well as the Bakersfield Parks and Recreation Department in order to fix up the area where their building is located downtown.

According to the marketing manager, Miranda Whitworth, the credit union has been working with the city since last December on making the improvements along H Street starting with the donation from Kern Federal.

The improvements included ripping out some of the irrigation along the lower slopes of H Street, ripping out all of the dead foliage and replacing them with the close to 200 drought tolerant shrubs, as well as replacing the slating in the chain link fencing along the Bakersfield Police Department building.

All of this could be seen Sept. 13 during the event held by Kern Federal called Superhero Saturday.

“This is a celebration of that, we held a symbolic ribbon cutting earlier this morning, and what we are doing now is in celebration of the project and the improvement we did downtown,” said Whitworth.

The credit union is hoping that more building owners and renters will take a step toward wanting to also help out and improve the area.

“What we are really hoping is other businesses want to step forward to make improvements around their buildings. We want to lead by example,” commented Whitworth.

The focus was to let businesses know you can partner with the city and parks and recreation in small ways to help clean up the downtown area.

“It is just seeing a positive spread, and we are hoping to lead the way,” according to Whitworth.

Alongside the credit union were several “community superheroes” as Whitworth called them. Assemblymember Rudy Salas, of district 32, had sent out mailers to the community to help spread the word of the event. He had also been in attendance speaking with those who came out to the event.

CHP was available to members of the community to do a car-seat check. This was in order to make sure that your child’s car seat was in working order as well as making sure that it wasn’t too small or to big for the child.

Hall Ambulance, E Waste Recycling, as well as some of the Bakersfield College football team and cheerleaders were also there to help promote the community and wellness event.