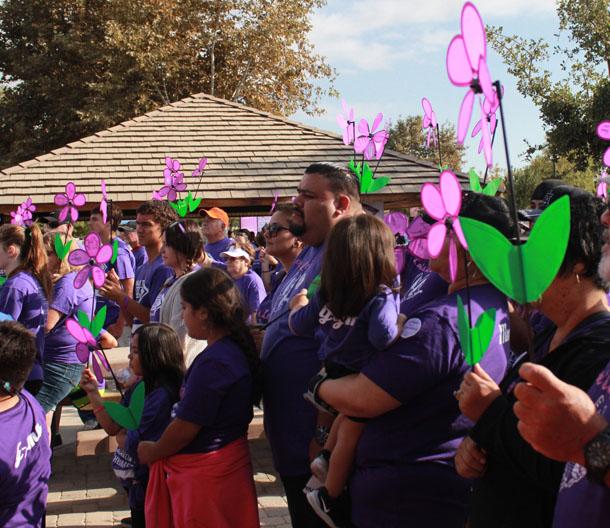 If you happened to have been passing by Riverwalk Park on Sept. 27, you may have noticed the purple banners and crowds of people in purple shirts.

This was the location of this year’s annual Walk to End Alzheimer’s, and to the people in attendance it meant a walk to find a cure.

The event started with the raising of many different-colored pinwheel flowers, with each color representing a different meaning. Blue meant you were someone who had Alzheimer’s, yellow was to show that you supported or cared for someone with the disease, purple meant you had lost someone, and orange was to show support of the cause and a vision without Alzheimer’s.

After the opening ceremony, the 5k walk started and was led by a group carrying a purple banner, followed by several teams that were wearing shirts to show support for whichever member in their family had been afflicted by the disease.

For one group of walkers, the hope for a cure was unfortunately not on time. Lou’s Legacy was in memory of a wife, mom, grandmother, and great-grandmother.

Amanda Gutierrez, a BC student and part of Lou’s Legacy, was walking in memory of her grandmother.

“The walk means a lot to me, my grandmother passed away in February of this year due to this disease,” she said.

For each group of walkers that were there, donations were made to their teams to help fund and find a cure. The association’s mission is to eliminate Alzheimer’s disease through the advancement of research.

“We as a family want to keep her legacy alive and raise money to help find a cure to end this,” Gutierrez commented.

The figures are astounding with at least five million people in the United States affected by the disease. Every 67 seconds someone in the US is diagnosed, and half a million people die each year from the disease, in addition to it being the sixth leading cause of death in America.

Still, however, this disease goes without a cure, despite all the deaths that happen in the United States alone.

As of last year, 55 million dollars was raised to help fund a cure through 650 different Alzheimer’s walks.

“We don’t want anyone else to have to go through this,” said Gutierrez.

For information on how you can help fund a cure for Alzheimer’s disease, visit the website at www.alz.org