BC getting new pre-law focus on campus 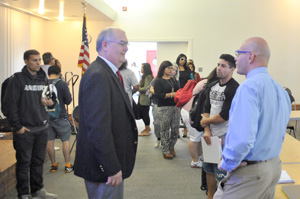 If you dream of becoming a lawyer or attorney, Bakersfield College has got you covered. Students interested in pursuing a career in law have a new, streamlined pathway courtesy of BC.

In conjunction with the State Bar of California’s Council on Access and Fairness (COAF), 24 community colleges in the state are implementing a pre-law focus for their students and agreements with UC’s to accept students who complete a pre-law focus at their two-year university.

Dean of Instruction at BC, Manny Mourtzanos, emceed an orientation on Oct. 2 in the Fireside Room to approximately 100 interested students. “We are creating the opportunity,” said Mourtzanos to attentive attendees. “Our job is to help you make the right decision.”

Organizers of the event also included Educational Advisor Jessica Garcia and BC political science professor Ed Borgens. The orientation explained that students must fill out an interest form, application and student contract, a letter of interest, as well as attending a Pre-Law scholars orientation session.

Students who enter the pre-law program and follow the IGETC (UC pathway) plan are to be accepted into one of six participating California four-year universities: USC, University of San Francisco, UC Davis, UC Irvine, Santa Clara University, and Loyola Marymount. Moreover, in line with new transfer degree options, pre-law students can acquire an AA-T in Political Science at BC and transfer to one of the aforementioned schools.

The State Bar, explained Mourtzanos, facilitates the program. “It was their [COAF] idea. Knowing that so many four-year schools have community college transfers, they put out a general call.”

With this new focus of study, BC will be creating a new class to comply with the pathway. The new course, Law and Democracy, will begin being offered in the spring semester, with only one section of the class being offered. However, “Given the overwhelming response [to the orientation], we have to offer more classes of Law and Democracy,” said Mourtzanos. The course will focus on an overview and introduction to law in general. The new course plan also includes time for “special studies” which would be an internship with local law firms or something akin to it.

Mourtzanos seemed very pleased when he saw the crowd in attendance, admitting that he thought there might be 20 or 30 people at the orientation.

Students, too, are excited about the new focus of course. Jordan Fuentes, a communication major, is now thinking about changing his major to account for BC’s newest program.

“[I am] really interested in pursuing it. I took Rhetoric and Argumentation, and realized I really enjoyed arguing and that was my first notion of arguing. I want to see if it’s for me,” said Fuentes. He is also excited about the ease of access to a four-year university. “It seems like a good way to in to a UC, and I always wanted to go to school in San Francisco.”

It was recommended that students interested in the program fill out and apply early, although Mourtzanos said it wasn’t a stringent application process and more of a commitment to intent. It was also suggested that students who are interested get enrolled in the Law and Democracy class as soon as possible.

For a full list of course requirements, as well as all the necessary documents and contact information of the programs facilitators and application guidelines, visit the BC website and find the pre-law section at www.bakersfieldcollege.edu/prelaw.