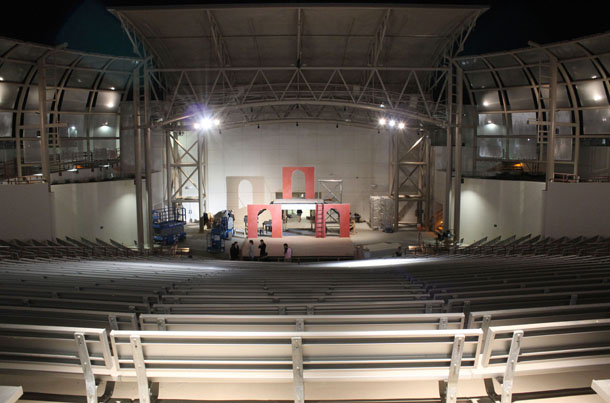 The long awaited opening for the outdoor theater has finally come to an end.

With the Shakespeare festival going on, it will bring two timeless plays: The Taming of the Shrew and Macbeth. The plays will run repertory to each other with Taming opening the festival.

Professor Randy Messick, Director for Taming, says that he hopes for a good turnout on opening night, Oct. 15.

“We just started gearing up, hopefully we will have an article in the Californian. I made posters today,” said Messick in regards to any public relations done for the plays.

Messick also mentioned that the festival has spring boarded a lot of the students into professional theater as well.

Macbeth, which opens the following evening, Oct. 16, will be performed by an all female cast.

Co-directors Kevin and Cody Ganger commented on the casting as being a trend for an all female cast.

“Shakespeare did all male casting, so it’s not that far off,” Cody said.

The play, instead of being set in the Elizabethan period, will be set in a communist Soviet Russia period.

“Macbeth is all about evil from, in this case, the dictator down,” Cody commented.

The Gangers are hoping for just as good of a turnout for their opening night.

For those wanting tickets for either show, you can purchase them at the campus ticket office. General admission is $8 and student admission is $5.