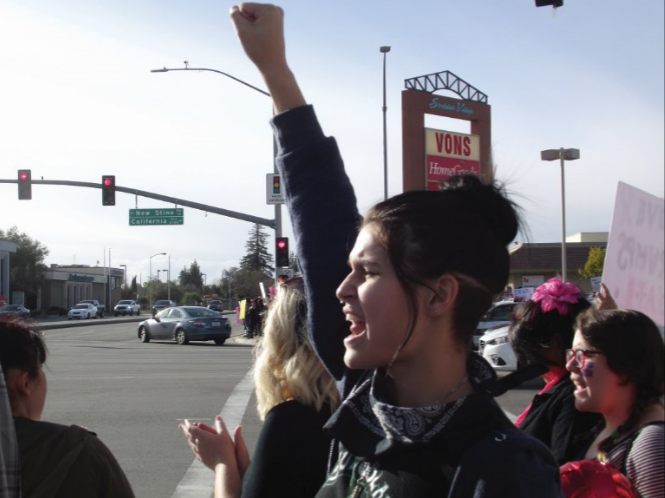 Bakersfield citizens gathered on the corner of Stockdale Highway and California Avenue the day after Donald Trump’s inauguration as part of the Women’s March on Washington.

The group was one of many sister marches that occurred around the globe, and was vocal in supporting the many issues affecting women today.

Signs carried at the march championed causes such as women’s reproductive health, immigration, and racism. The crowd chanted and cheered when passing cars reacted.

People were united in defending women’s rights, but everyone had their own reasons for showing up.

“It’s just so important that we give a voice to the vulnerable,” said Audrey Chavez, a Bakersfield native and activist.

Chavez, 50, attended the march with members of her family, including her 85-year-old mother Oralia Montoya, who suffers from Alzheimer’s disease. “We need to progress, not regress,” she remarked. Bakersfield College student Ken Mazariegios, 20, marched with a sign that read “I march 4 my mom & all my friends who are girls.”

Mazariegios said that women were leaders and that when it came to protecting women’s rights, “If no one else is doing it, I might as well do it.”

Another person who was marching for a family member was Audraey Steelman, 26, who said, “I’m the older sister of a little girl who is going to have to grow up in this misogynistic world, dealing with people not understanding what it is to be a girl, what it is to be a woman.”

As cars passed through the busy intersection, many responded positively by honking, raising their fists, or throwing peace signs at the activists.

Others filmed from their vehicles as they went by.  The march was not well-received by all, however. Steelman described how she had to push her 12-year-old sister Allayna Cisneros back when someone threw eggs into the crowd gathered on the sidewalk.

Other negative responses took the form of people making thumbs down gestures, flipping off protesters, and shouting out support for Donald Trump, who was the subject of many signs.

Despite the unfavorable response, marchers did not appear disheartened and merely cheered louder.