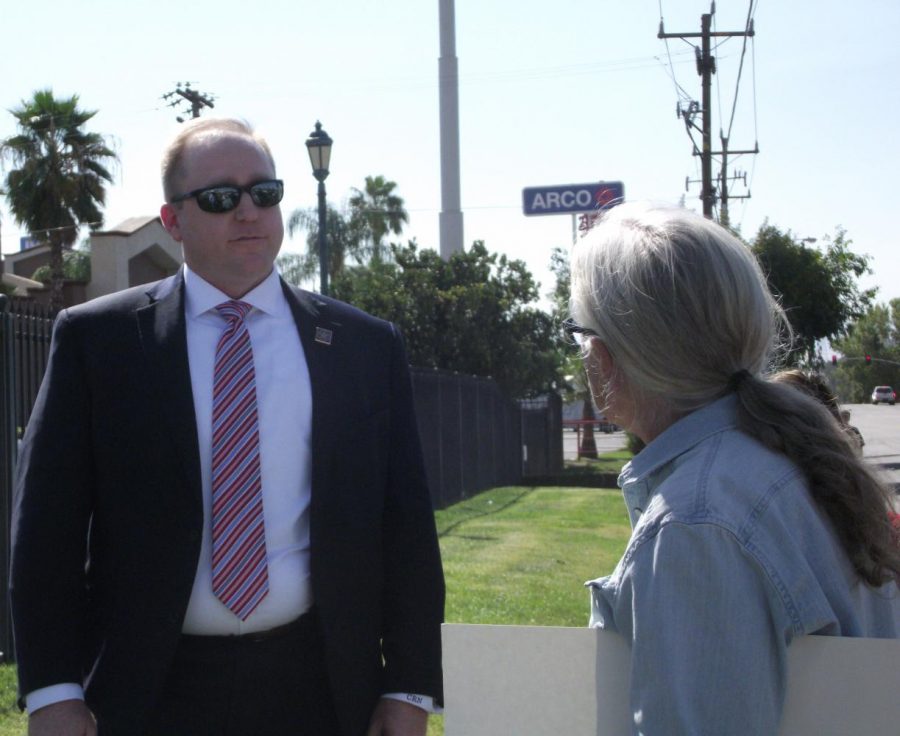 Protestor Douglas McAfee asks a Secret Service member to explain why demonstrators were asked to move.

Demonstrators gathered outside of Buck Owens’ Crystal Palace to protest the visit of Vice President Mike Pence on Oct. 10.

Pence, along with House Majority Leader Kevin McCarthy, were attending a breakfast fundraiser at what was originally an unknown location. Protestors initially planned to meet at 11 a.m. in front of the Stockdale Country Club where Bakersfield Republican Women, Federated were holding a general meeting at 1 p.m. instead, in the hope that some of those who attended the fundraiser with Pence would attend and see them.

About an hour into the demonstration, the Secret Service made the protestors move across the street to the northern corner of Buck Owens Boulevard and Sillect Avenue.

Douglas McAfee, one of the demonstrators, said he was protesting because, “Pence is an affront on the constitution and the freedom of speech.” When asked to move, McAfee approached the Secret Service member to ask why. “I asked him, ‘Didn’t you have a plan for this corner? I mean, why did you let us assemble and then have us disperse?’ I didn’t get it, and he said, ‘Well, there was a problem with communication … with the police department,’ or something.” According to McAfee, the police department said they had not heard anything about why the protestors were forced to move when he asked them. “They know that we’re no threat … How are we more of a threat here than there? We’re not,” said McAfee.

The protest continued nonetheless, with chants of “No Trump, no Pence, no walls, no fence!” and people carrying signs supporting an array of issues from healthcare and reproductive rights to immigration and the environment. “We’re here to say that no human is illegal, that deportation is inhumane, and that we want a clean Dream Act passed in the house and the senate,” said a protestor named Brandon Hudspeth over a megaphone.

Neither Pence nor McCarthy could be seen leaving the event, but some protestors knelt near the end of the protest to show solidarity with National Football League players like Colin Kaepernick who have been kneeling during the national anthem to protest police brutality in America. On Oct. 8, Pence left an NFL game in protest of the players who decided to take a knee amid controversy due to the trip costing an estimated $200,000 of taxpayer funds.