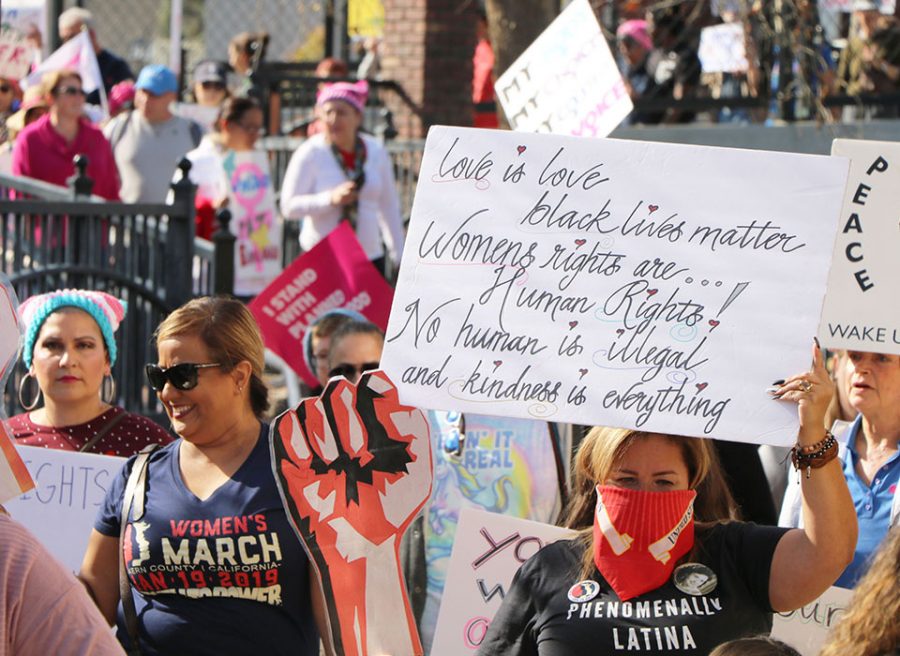 Thousands of women and allies came together at Mill Creek Park in downtown Bakersfield to participate in this year’s Women’s March, on Jan. 19.

The first worldwide Women’s March was held the day after President Donald Trump’s inauguration in 2017.

The march is a global organization that advocates for addressing social issues, ending violence against women, labor rights, LGBTQ rights, along with many more causes.

This year’s theme was Truth to Power.

“White mainstreamed feminism has never included women of color. As a result of that, we are often the back-stand stood upon while white women fight for their rights at the sacrifice of ours,” said local business owner Faheemah Salahud-Din.

“Traditionally, Bakersfield is a place where women of color don’t have a voice much less a sit at the table so we have to fight,” Salahud-Din continued.

Various signs were carried at the march, some including pro-DACA signs, pro-Planned Parenthood signs, anti-build-the-wall signs and more.

BC student, Yesenia Calderon’s sign said: “feminism without intersectionality is white supremacy.” She wanted to show her support to include people of color and the gay community in her feminism because she felt many feminists failed to do so.

The march was designed to inspire, and everyone who participated had their own reasons to march.

Ana Reyes, a student at Bakersfield College came out to the march to have a voice for minorities who are afraid to stand up for themselves.

Cameron Dakota Chow Garcia and his mother Arianne Chow, with the Chalon

Indian Council of Bakersfield, marched to represent all the missing and murdered Indigenous women.

“To me, this march means the beginning of something that can be much greater and the stepping stones to a more versatile and solidarity-based movement, and hope to oppose all forms of oppression and margination in our community and across the United States,” said Garcia.

The chant heard the most throughout the march was “Arriba la mujer,” which translates to up with women.