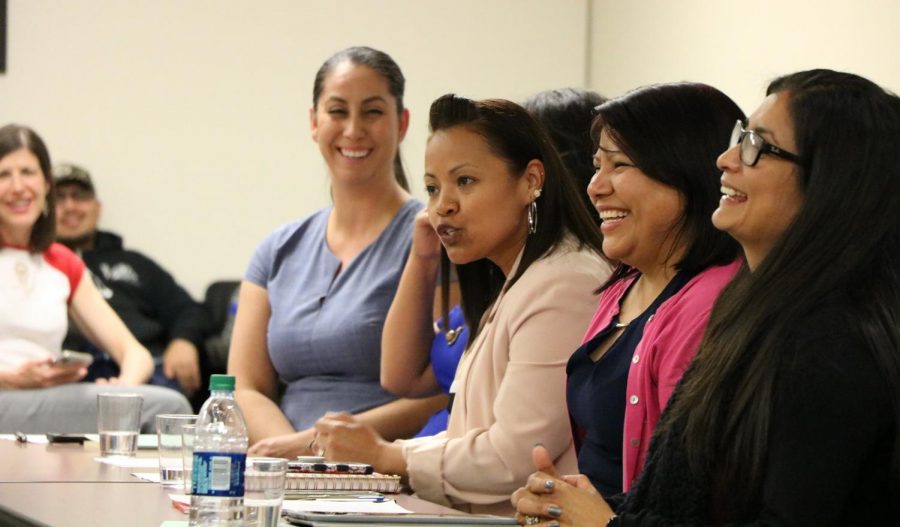 Brenda Valdez, Communication and faculty advisor for Latinas Unidas, gave thanks to Imelda Valdez and the Catalyst Grant before introducing the club members and mentioned their achievements thus far.

“Today we are here to celebrate Dolores Huerta Day and what best way to do it with a Latina panel discussion,” she said.

The deliberation, open to the public, featured five educated Latina women in Kern County who work in various fields.

Members of BC’s Latinas Unidas asked the panelists questions about their educational struggles and advice on how they got to their current positions.

Olivia Garcia, a history professor at BC, was among one of the women on the panel.

In response to the question, Garcia talked about her educational journey.

While attending South High School, Garcia said she wasn’t sure about attending college until “a professor actually saw something in me that I didn’t see.”

As a first-generation student, Garcia attended BC and earned an Associate’s Degree in journalism.

She then attended Fresno State and said it was hard leaving home and stepping out of her comfort zone.

After graduating with a B.A. in journalism, Garcia was a reporter and editor for the Bakersfield Californian and went on to get her masters in history.

Another question asked by one of the Latinas Unidas club members was, “which hardships did you face navigating higher education both as Latinas and as women?”

Lopez said she migrated to the U.S. as a young girl with her parents who did not speak English.

She said a high school counselor for the migrant program helped her with the college application hurdle.

Lopez said growing up it was hard for her parents to accept her going away to college because she looked after her younger siblings.

“At first it was kind of they felt that I was abandoning them, like I was just leaving them and the family,” she said.

Amber Tovar, a Lawyer for the United Farm Workers Foundation, said one hardship she faced was “finding people who were in the same situation as me, that looked like me.”