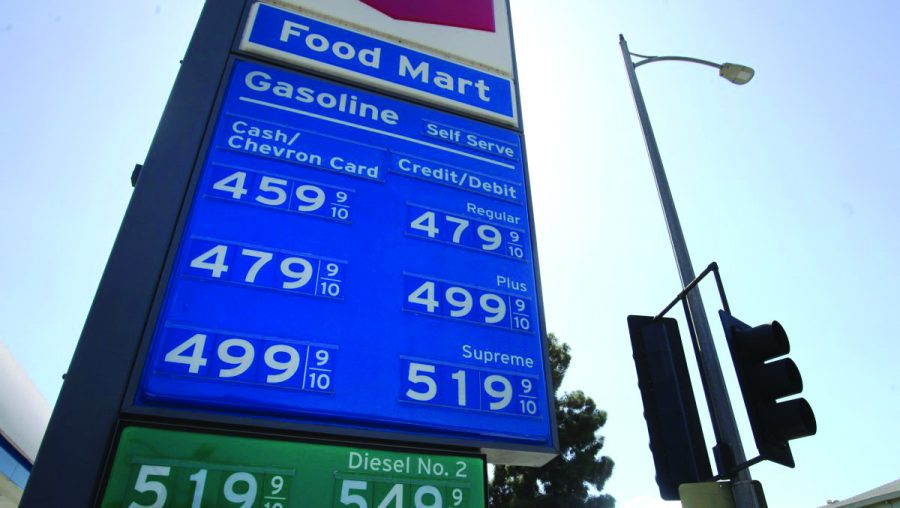 The gas prices per gallon at a Chevron Gas Station in the Los Angeles area. Gas prices are nearing the $5 mark, whereas other gas stations in California are already above that mark.

In the past month, Bakersfield’s gas prices have risen over 40 cents per gallon.

All over California, cities have been hit with skyrocketing increases in the cost per gallon of gasoline.

According to GasBuddy, an app that provides information and prices for gas, “limited ability for gasoline to be sent to California during times of disruption is one of the main reasons for the skyrocketing price.”

Some refineries suffered setbacks in the production of gas, while other refineries are under maintenance and aren’t able to provide for California. More than half of the refineries from 1983 remain on the west coast to this day, the number of refineries dropped from 55 to 27 that still operate.

According to Jeanette Casselano, AAA spokesperson, stated in a news release, “all regions are seeing planned and unplanned refinery maintenance, but it is only the West Coast that is really seeing gasoline stocks tighten and gas prices increase.”

Due to the setbacks faced, the state is likely to see an additional 20-50 cents per gallon rise over the next week or two. The price will surge from the production of gas which requires CARB-mandated fuels that can be difficult. Also, California has the highest gas taxes in the nation and the carbon program that adds to the cost of fuel.

On July 1, California surpassed Pennsylvania for the highest gasoline tax in the U.S. with SB1. The SB1 Bill provides the transportation funding, which includes the funds for maintenance and construction of highways, local streets, and roads.

According to an article on the San Diego Tribune website, “the gas tax proved controversial. An attempt to repeal SB 1, led by radio talk shot host and former San Diego city council member Carl DeMaio, made it onto the statewide ballot in November 2018 but Proposition 6 lost, 56.8 percent to 43.2 percent.”

Since the loss endured by the proposition, gas prices remained relatively higher than past years in California.

California is the state that has the gas price of $5.52, almost peaking at the state’s highest gas prices since May 2014.

California, and the other states, are in luck, according to Patrick DeHaan, head of petroleum analysis for GasBuddy, “I believe we’re due for the national average to edge lower by perhaps five cents in the coming week.”