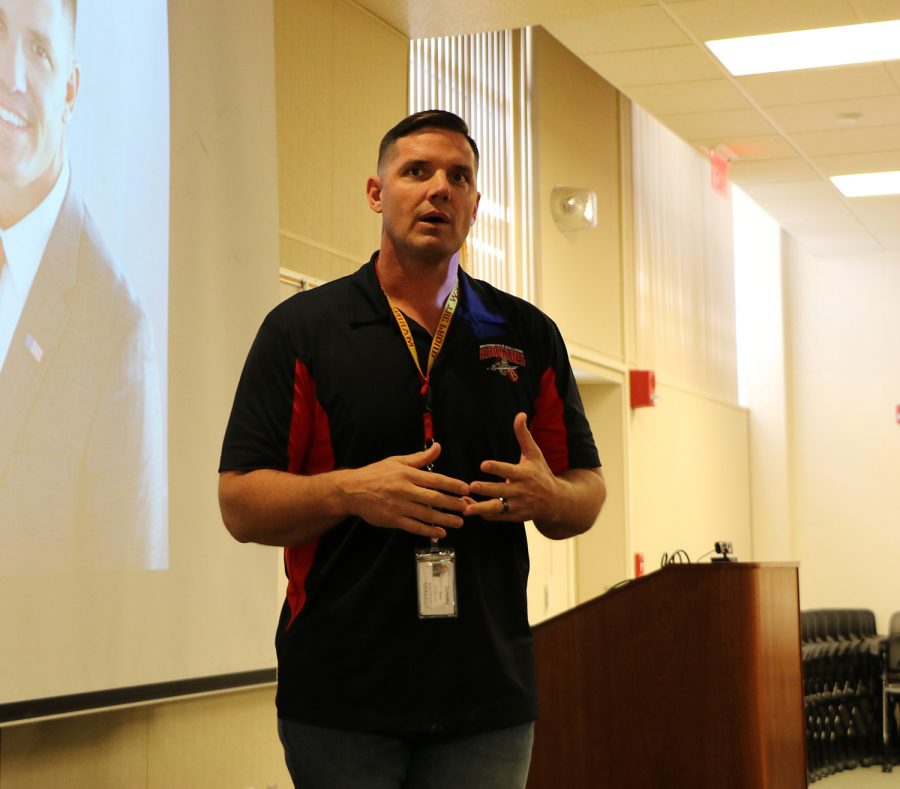 Jeremy Staat speaking about the Veterans foundation and how he transitioned from the military life to the civilian life at the BCSGA power lunch in Levan Center on Nov. 18.

Jeremy Staat, Bakersfield College professor and candidate for congress in the 8th district, spoke about his transition from military life to civilian life, his reason for running in congress, and his political ideals at the BCSGA power lunch in the Levan Center on Nov. 18.

Jeremy said that he believes that the political parties only divide the United States.

“I’m actually an independent but I cannot win as an independent. So, I have to choose a side. I’m pro-life, I’m pro-second amendment, pro-Jesus, but I believe in cannabis research,” said Staat.

Before Staat became a faculty member at Bakersfield College he played football with the Pittsburgh Steelers and was a member of the United States Marines.

“I really thought; wow here we are being attacked [9/11]. Things are going to change, and here I am playing football games. I’m trying to make money in the NFL. So, I decided there was more to life than the NFL. I told my agent I no longer wanted to be in the NFL, I wanted to defend our country,” said Staat.

In the Marines Staat toured Haditha, Iraq and he described what he witnessed.

“One thing in Iraq that I learned is that a laugh is the same in any language. Being in Iraq I would see kids playing soccer and their feet were so callused from running around with no shoes that they would have pads on the bottom of their feet,” said Staat.

Staat decided to switch to politics because he wants to represent the veterans in congress.

“Right now, in the sitting house, 22 percent are veterans, it’s one of the lowest percentages that we have ever had in this country. And we wonder why our VA [Veterans Affairs] system doesn’t work,” said Staat.

With the growth of the media and technology, Staat shared his perspective on how social media impacts relationships in today’s society.

“But once again, through social media, a lot of people miss the point. And they read it for what they say and they take it out of context. They need to relate on issues. Right now, we got people because of social media we might agree on this issue but there might be 12 other issues that we agree on,” stated Staat.