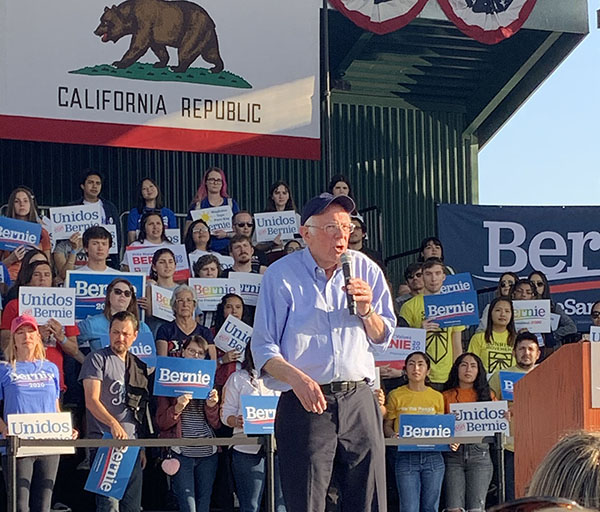 Presidential candidate Bernie Sanders paid a visit to Bakersfield at the Spectrum Amphitheatre on Friday Feb. 21 to rally for Kern County’s vote in the primary elections.

Sanders spoke on behalf of many issues which his campaign is promoting. Some of the many topics that Sanders advocated for in his speech included climate change, social equity, and free healthcare.
“What this campaign is about is, saying loudly and clearly, that we will no longer tolerate the obscene level of income and wealth inequality that exists in America,” Sanders said.
Sanders announced to the public that America cannot be run on a system where certain aspects or groups are excluded. Sanders called out voter-suppression which he stated the republican party has used to buy their way through elections.

Sanders addressed the lack of social equity when he called out on President Trump.
“What is really ugly about what Trump is trying to do[…]is intentionally try to divide the American people based on the color of our skin, where we were born, or our religion,” Sanders said.
Sanders promised as elected President he would raise the minimum wage to at least 15 dollars an hour, make housing affordable, triple funding for Title 1 low-income public schools, and make college tuition-free.
An issue that has a big platform on Sanders’ campaign is medicare for all.

“I believe healthcare is a human right for each and every one[…]Bernie Sanders’ plan for medicare for all is one of the reasons I will support and go to the end with him,” said Lupe Martinez, Bernie advocate, and father of a son who could not receive healthcare, therefore, which led him to emigrate the country.
“Nobody on the medicare for all will spend more than two-hundred dollars a year for their prescription drugs,” said Sanders.
Sanders also emphasized that he is pushing for a “green new deal.” He proposed that America will stop using fossil fuel and, instead, use efficient and sustainable energy. This green deal will also open up to 20 million well-paid jobs by turning away from fossil fuel.
“A lot of people in the democratic establishment want to say that they’re for gay marriage, for trans-rights, abortion, etc, but the fact of the matter is when it was politically convenient for them to vote against it Bernie Sanders was one of the few that stood by his principles,” said supporter Erik Reedy.

Other issues Sanders took into regard were putting an end to ICE raids, passing immigration reform, and background checks on gun carriers to avoid gun violence.
“Every family in America has its problems but we work together to solve them,” said Bernie Sanders.