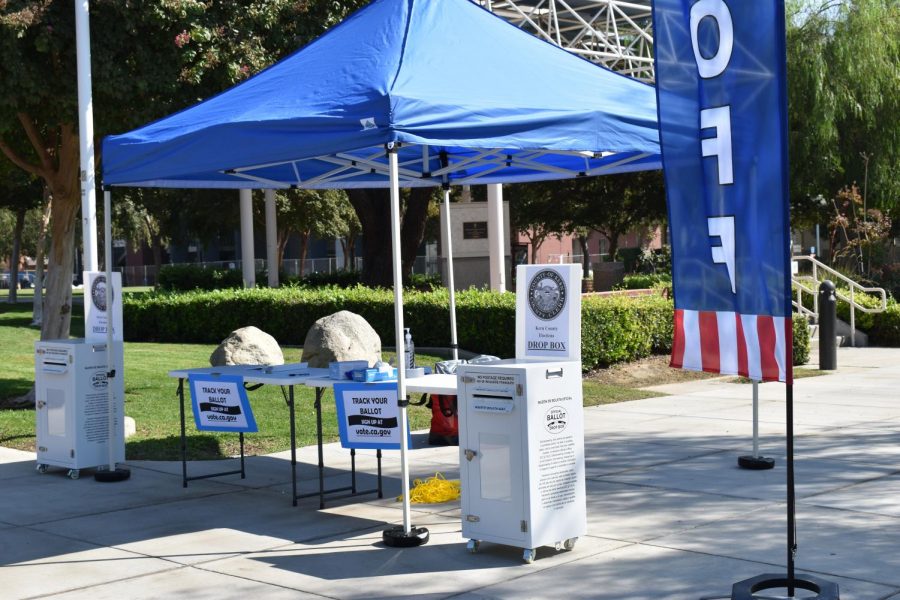 A curbside ballot drop off at Bakersfield College’s main campus.

The United States presidential election of 2020 was held on Nov. 3. Democrat Joe Biden defeated President Donald Trump to become the projected 46th president of the United States early Saturday morning, on Nov. 7. Four days after election day.
Beyond the presidential contest, some Kern County local races and California propositions have been official. Although, according to Kern County Elections Department, more than 309,000 residents voted in the general election and more than 166,000 ballots in the county have been counted so far. But as of Nov. 10 these are the results so far:
Results for United States House of Representatives:
In California’s 23rd Congressional District, Kevin McCarthy (R) has officially defeated challenger Kim Mangone (D). McCarthy was also was elected Republican Leader in the House in 2014.
In California’s 21st Congressional District, the results for D-Incumbent, TJ Cox and David Valadao are too close to call, as of Nov. 10. Valadao has a narrow lead with about 51.8% of precincts reporting.
On Nov. 10, the Kings County Elections Department announced they will be temporarily closed due to a COVID-19 exposure. Which means we will not know the results of the 21st Congressional District race until at least Nov. 21. Tens of thousands of ballots are still left to process/count.
Results for California’s State Assembly Districts:
For State Assembly 34th District, Vince Fong (R) has defeated challenger Julie Solis (D). Fong got 66,676 votes compare to Solis’s 37,308, within Kern County.
For State Assembly 32nd District, Rudy Salas (D) has defeated challenger Todd Cotta (R). Salas has been California’s 32nd State Assembly district since 2012.
Results for the Kern Community College Board Member:
Jovani Jimenez has defeated Jack Lavers for Kern Community College Board Member by 1,128 votes, Kern County Elections Department reported.
Results for the Bakersfield City School Board:
Bakersfield College COMM professor Christine Cruz-Boone won a seat on the Bakersfield City School Board Trustee Area 3 for a 4-year full-term. Cruz-Boone won 54.75% of the vote against Ralph Anthony.
Results for the statewide Propositions:
Only ten of the 12 California state ballot measures have been determined as of Nov. 11. with about 90% of precincts reporting, LA Times reported. Seven props have officially failed, while three has officially passed. They include:
Prop 15 has failed, which means property taxes on the state’s large businesses that are worth more than $3 million will stay the same and California’s schools and local governments would not get new funding.
Prop 16 has failed, which would have reinstated affirmative action.
Prop 17 has passed, which will allow voting rights to people on parole in California. Also, allow parolees to run for office if they are registered to vote and have not been convicted of perjury or bribery.
Prop 18 has failed, which would have let 17-year-olds to vote in primary and special elections if they will turn 18 by the next general election and are eligible to vote.
Prop 20 has failed, which means there would be no increase in penalties for people who commit certain theft-related crimes.
Prop 21 has failed, which means the state would remain the same maintain current limits on rent control laws cities and counties can apply.
Prop 22 has passed, which means app-based rideshare and delivery companies (like Uber and Lyft) could hire drivers as independent contractors.
Prop 23 has failed, which means dialysis patients would not require having at least one doctor present during all the patient’s treatment hours.
Prop 24 has passed, which means consumer data privacy laws and rights would be expanded, and businesses would require meeting the new privacy requirements while also continue to follow the existing ones.
Prop 25 has failed, which rejects the law on replacing money bail with a system based on public safety.