Local leaders and residents reaction of the 2020 presidential election results 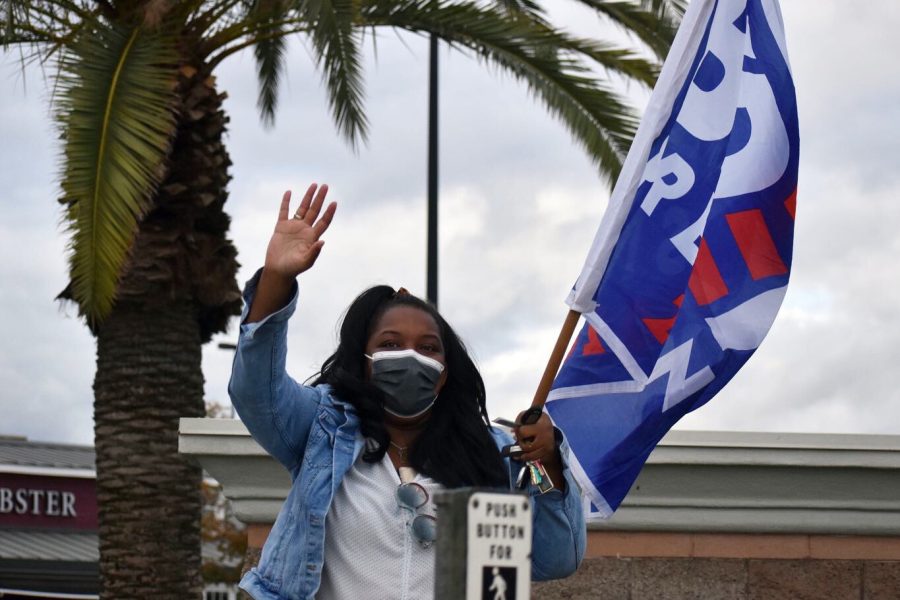 A Biden supporter waving at passing cars on the corner of Coffee Road and Rosedale in North Bakersfield, CA, Nov. 7.

Kern County residents and local politicians had mixed reactions after the announcement that Democrat Joe Biden defeated President Donald Trump to become the projected 46th president of the United States early Saturday morning, Nov. 7.
Local Biden and Trump supporters were on the corner of Coffee Road and Rosedale Highway in North Bakersfield the day of the announcement.
Trump supporters gathered to pray for President Trump’s reelection in the parking lot in front of Walmart on Rosedale, while a group of Biden supporters celebrated Biden’s victory holding flags that represented the LGBTQ community and Biden for President 2020 on the corner of Coffee Road and Rosedale Hwy.
Bakersfield Congressman Kevin McCarthy—R, told Fox News on Nov. 4 that Trump won the reelection, and voters should stand behind the president. As of Nov. 9, McCarthy has not released a new statement regarding the 2020 presidential election and Biden’s elect-victory.
California Gov. Gavin Newsom—D., congratulated President-elect Biden and Vice-President-elect Kamala Harris after they was declared the projected winners.
In Newsom’s statement on Biden’s and Harris’s victory: “Joe Biden and Kamala Harris were the choice of a record number of American voters – and an overwhelming majority of Californians — because we know they will represent all Americans. They will treat every person with dignity and deserving of equal opportunity. They will attack systemic injustices, not their fellow Americans. They will respect the rule of law and democratic institutions. They will elevate science and expertise and renew America’s place of leadership in responding to global threats like COVID and climate change. In short, they will return our better angels to our nation’s highest offices.”
California State Senator Shannon Grove—R., released the following statement a day after the announcement that stated Biden is the elect-winner on her personal twitter account: “I still believe Donald Trump will be President [for] the next four years.”
Grove represents the 16th State Senate district, encompassing the southern Central Valley, including most parts of Kern County and parts of the High Desert.
While California State Senator Melissa Hurtado—D., released in a statement that she believes the announcement of the Biden’s and Harris’s victory as a “bright new chapter in our American story.” Hurtado represents the 14th Senate District, which encompasses parts of the southern Central Valley, including most of the majority-Latino portions of Fresno and Bakersfield.