First peace garden opens on the BC campus 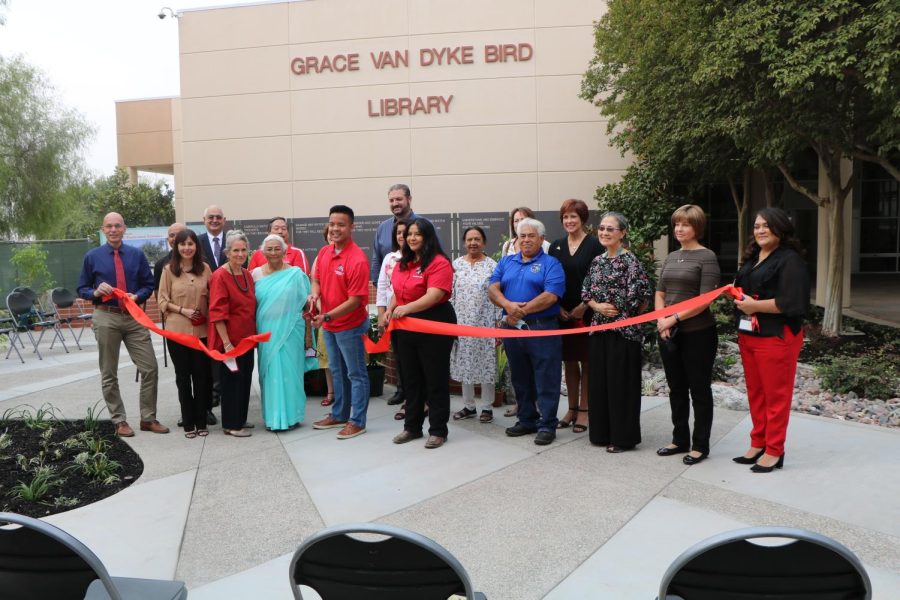 The ceremonial ribbon is cut during the grand opening of The Learning Garden in front of the Grace Van Dyke Bird Library on Oct. 4.

Bakersfield College hosted a grand opening ceremony for its first peace garden, which is in front of the Grace Van Dyke Bird Library, on Oct. 4.

In October of 2019, former BC President and current KCCD Chancellor Sonya Christian had a talk with Arun Manilal Gandhi and Dr. Naina Patel after BC’s tribute to Gandhi at the Delano campus, which led to her envisioning peace gardens around the BC campus.

Two years later, the garden was finally opened in the same spot where that meeting took place. BC Anthropology Professor Krista Moreland was the first to speak, where she introduced fellow speakers Lindsay Ono, BC Professor of Agriculture, Nan Gomez-Heitzeberg, KCCD trustee, Edith Mata, BCSGA President, Sudha Bhatt, a representative from the Gandhi committee for truth and non-violence, Gian Gayatao, KCCD student trustee as well as Christian herself.

Inspired by the great peacemakers such as Gandhi, the Dali Lama, and Martin Luther King Jr., the garden was named “The Learning Garden” as a tribute to all of the “thousands of years of wisdom and knowledge” that can be found in library archives, according to Moreland.

The Learning Garden will house a bodhi tree, also known as a “tree of enlightenment,” which Professor Ono said should give BC the nickname “the college of enlightenment.” The garden will also have many jasmine flowers, which are native to India.

With quotes from compassionate, peace-loving people such as Cesar Chavez and Nelson Mandela engraved on the ground, as well as metal panels engraved with quotes from Gandhi, the garden looks to inspire its students for years to come. In fact, the metal panels are meant to oxidize over time, turning into a warm, brown tone.

A peace pole was also erected, with the phrase “may peace prevail on Earth” engraved on all four sides, each one in a different language (English, Spanish, Hindi, and Tagalog respectively.) The pole was made by BC Professor Klint Rigby.

The second peace garden, which will be located in front of the campus’ humanities building, is currently set to open on Oct. 2, 2022.