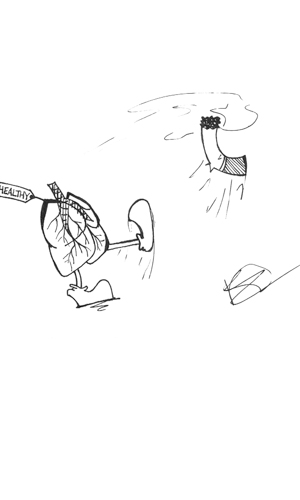 As a student who dislikes smoking, when I heard about the vote on whether they will make the Bakersfield College a smoking free or smoking designated campus, I was quick to vote on the smoking free campus.

It may be a selfish vote, but when I saw people smoke even in locations where the sign clearly read that they shouldn’t smoke within certain feet within the area, I knew that the designated area wouldn’t make any difference.

It also isn’t the fact that people won’t follow the rules, but it will keep non-smokers safe from becoming victims of secondhand smoking.

I don’t personally have anything against smoking, but having friends who have bronchitis and asthma around me, I don’t like the idea of being exposed to smoke when they already have trouble breathing.

I can handle headaches from time to time from smelling strong odor of smoke coming through a nearby vent that has a smoker at the end of it, but that won’t stop me from feeling the irritation.

Now I’m not saying that smokers are selfish, but I do believe that they should have thought about other people’s health.

Maybe not all smokers were inconsiderate and actually distanced themselves far enough so that they can smoke away from buildings for the required 20 feet, but it doesn’t change the fact that it still brought harm to other non-smoker’s health.

With BC being a college for many parents in the county, I believe that it is good for a child friendly environment too.

There aren’t many children on the campus, but I have seen some parents bringing their kids in and around areas where there were smokers present.

I have heard some smokers tell me “then why don’t you avoid us?” or “then go the other way.” There are a lot of things wrong with these types of statements.

First off, they were smoking around the H building, which during that semester was the main building for most of my classes.

Secondly, why should others move when you are the one that is causing trouble, not just for me, but for many others that are in the classes and could smell the smoke through the vents?

I’ve been in class where a professor was irritated by the smell, along with few of the students within the classroom, and had to exit the room to find the smoker and tell them to refrain from smoking near the air vent.

Not that it helped telling one person, because it happened again a couple of classes later by a different smoker.

For BC to become a smoking-free campus will benefit many non-smoking students’ health, and it may even help from having lectures interrupted due to smoke coming into the air vents.