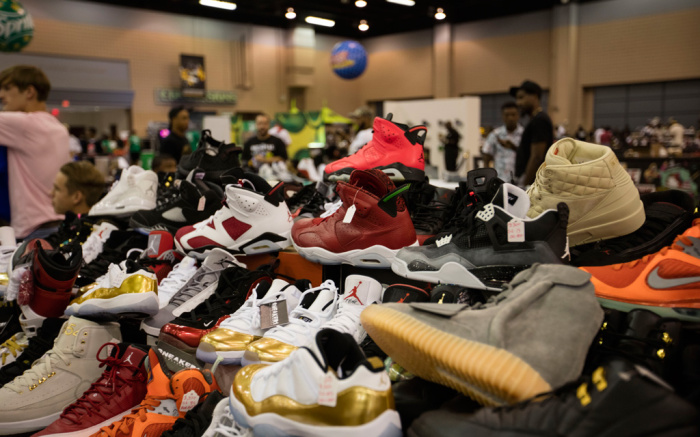 A display of different shoes at SneakerCon.

Sneaker culture has evolved into a phenomenon that now reaches far beyond the typical sneakerheads and Jordan collectors. More and more people across the nation are becoming interested in the world of sneakers, and it isn’t just in big cities. Conventions like SneakerCon and ComplexCon exist to showcase the best releases brands have to offer, but also to expose rare and exclusive sneakers to those who would otherwise have no shot at copping the shoe. Big cities such as New York, Philadelphia, and Los Angeles have specialty sneaker boutiques that regularly release sought after sneakers, but small towns are easily left out of the equation.

It used to be customary that sneakerheads hang out at these boutiques, create friendships with the employees, and gain access to the best releases. I agree that being in love with sneakers comes with discussing them with other people who are also educated, but the old system just isn’t plausible anymore. Far more people who are interested in sneakers don’t have shops like UBIQ or Sneakersnstuff around the corner to build these relationships. So naturally, people have turned to the internet.

It began with message-boards and sneaker blogs, but now Instagram and Twitter are the hotbeds for anything and everything going on in the sneaker world. Media outlets like Complex and Hypebeast have capitalized on the shift to the internet by not only covering what shoes are releasing, but have also extended the sneaker culture into the mainstream. One aspect of sneaker culture that people are torn about though is the reselling market.

Companies like Goat and Stock-X are now making sneakers available to anyone, anywhere, whether you were able to score on the drop or not. But reselling websites present two major issues. First being you will have to accept paying the resell value for the sneakers, which may be anywhere upwards of 100 dollars over retail. Second is the instant gratification of going online and buying a shoe, knowing they’re going to end up at your door.

Sneakerheads will all agree that some of the best sneaker experiences come from camping out in lines or hunting down a sneaker that has escaped their grips multiple times.

But on the other hand, resell websites accurately represent the resell market, which is constantly changing. If you pay enough attention to a sneaker that has caught your eye, you can purchase them at the best price.

Reselling gets a bad reputation from sneaker traditionalists and their main argument is that reselling is a way to exploit the sneaker and use it for profit. Every guest on the popular sneaker talk show, “Full Size Run” gets asked the same question: “Have you ever resold sneakers?” Obviously, the connotation is negative, but you can’t escape the fact that people are turning to reselling and buying resold sneakers.

I see both sides of the spectrum and have bought sneakers from both boutiques and resell websites. Living in Bakersfield puts me in a tough position if I want to buy sought-after sneakers, but it is getting slightly easier.

The bottom line is if you’re interested in sneaker culture, it’s important to do your research and understand what makes them so unique. As social media continues to grow, it becomes more about having what other people don’t and not about doing something you love. The history of sneakers runs deep, and deserves not to be brushed over.