Cell phone lives up to name 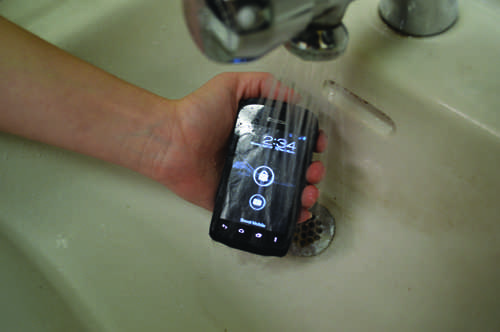 Boost Mobile’s newest Android powered smart phone may be the answer to saving a phone from your drunken college escapades and general clumsiness.

Aptly named, the Kyocera Hydro will survive the trials of any bumbling college student whose phone seems to be inexplicably attracted to anything liquid.

The water-resistant device might just save you from the pain and hassle of a water logged personal assistant.

Immediately upon receiving the phone my only thought was, “This thing is turning into the Kyocera SCUBA, and he will dive a lot.”

The rigorous life a college student demanded such a thought and likewise, some trials that reflected that life.

Also, who doesn’t want to put a phone in water-related items and see what happens?

The first test reflected what might happen on a daily basis, simply called the spill test.

The beverage of choice for the spill test was, naturally, every college student’s favorite drink, beer.

While the phone lay on its back, it was bathed in a small puddle of beer on my kitchen counter for about three minutes.

Text messages continued to roll in with no apparent problems, the Hydro all the while buzzing away, creating some interesting ripple effects in the puddle of amber nectar.

The only problem was wasting a half glass of beer.

After the phone performed so admirably in an everyday occurrence test, the severity of conditions needed to be increased.

The next test, the deluge, required an audience and a control margin.

This test was proposing holding the phone directly under a running faucet on full blast while recording video. The control would be an old iPhone that merely turned on.

The Hydro was completely drenched, my sister exclaiming, “You’re going to have to pay for that!”

Even after being under running water for approximately one minute, the video continued to record and didn’t miss a beat.

The iPhone was turned on, the water started, phone soaked. The iPhone struggled for about 10 seconds the circuits frying and promptly faded to the black screen it started with.

Everyone gathered around to watch the tests was quite pleased and impressed, one remark coming from a friend, “Not so cool now, are you iPhone!”

For the final test, submersion was necessary to really test its water resistant capabilities. This simulated toilet drop was by far the most fun.

A bucket was filled with about nine inches of water and placed on a stool at what I deemed to be toilet height. I started six applications, told all my friends to text me at once, and played a song called “Breathing Underwater” by Metric.

For six minutes, the little phone that could was the Kyocera SCUBA.

It didn’t miss a beat. It continued to buzz at the bottom of the bucket from music and text messages while friends and family took bets on when it would die out.

With a grin, the phone was removed, shaken dry a bit, and made a long distance call like it had been in my pocket the whole time.

Although the manufacturer said the phone is capable of withstanding 30 mintues of submersion, I thought this was enough to display its capabilities.

The only other test I would have like to perform is a Slip N’ Slide test, but that would be more for my own benefit.

Looking at the technical and performance specifications of the Hydro, the phone performs as to be expected from a low-end smart phone.  It is rather small, with a three-and-a-half-inch screen and no slide-out keyboard. Although a full pop-out keyboard would defeat a water-resistant device so I won’t count that against the Hydro.

While the processor stuttered when running high demand applications, it moderately performed the required tasks of a college student’s phone in other realms.

The 3.2-megapixel camera has video and a flash, but is nowhere near the quality of high-end phones. It too was run-of-the-mill.

Call quality and messaging is shoddy, but those features do indeed work.

Boost Mobile, who is known for their affordability and accessibility rather than call quality, is the culprits for this.

It is not some design flaw in the phone, so I didn’t count that against it either.

Overall, this phone is perfect for college students on a budget who have a hard time keeping their phones dry.