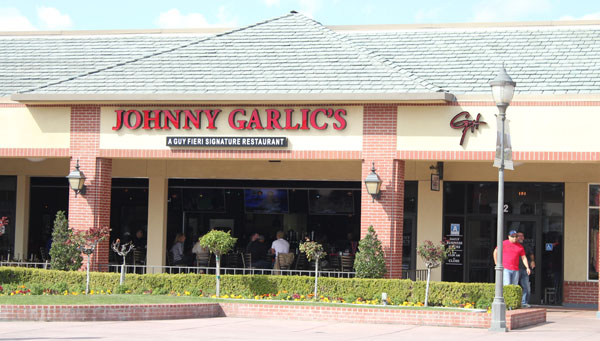 I have been anticipating the opening of Guy Fieri’s restaurant Johnny Garlic’s for the past month, and thankfully I was not let down at all.

I made the choice to go on the opening night for it, but even so, the wait to be seated was far less then I had expected.

The waitress I had was very helpful when I was attempting to figure out what cocktail I wanted to start with. I chose the Vickie’s Vixen, which is mainly a shot of cinnamon fireball and then rum as well, but the best part was the fact it tasted like a piece of apple pie.

While you are waiting for your food, they bring you complimentary focaccia bread with olive oil and vinegar to dip it in. If you have never tried it before, I highly recommend even just tasting it before you dip the whole piece of bread in it, simply because it isn’t always everyone’s cup of tea.

The great thing about the breads and all of the food is it is all done by scratch in the kitchen that runs along two sides of the seating area. You can see the main kitchen through a long window in the dining area, which I thought was really cool because it allows you to see your food being cooked and what goes on in a kitchen.

I decided to be a little adventurous in my choice of entrée and tried the bacon mac-n-cheese burger with a side of garlic fries.

It was different but very tasty, and I usually ask for no pickles or onions on mine. But this time I decided to add them to the burger, and the pickles themselves are like nothing I have ever tasted or seen before. They were very thinly sliced and looked almost like a cucumber.

I personally could have eaten the pickles any time and been happy.

The garlic fries though made my night. No longer do I feel like I have to wait until I go to Dodger Stadium to get the one food that I love.

With my dessert, my friends and I decided to have another cocktail that we could all share. Thus enter the great idea that Johnny Garlic’s has, the fish bowl.

It consisted of about four different alcohols as well as Sierra Mist and mango puree. It was worth the price of $27 considering the size of the drink that you get.

I ordered the peanut butter and snickers bar ice cream pie for dessert. I felt like I would go into a sugar coma with how sweet it is, but the slice you get is rather big and if you can’t manage to finish it all they will box it up for you to take home.

The prices on some of the foods seem a little out of price range even for myself, but if you want a great burger $14.50 is the normal price for all of them, except for maybe one or two.

I have no doubt that I will be going back to try some of their other menu items, including the Hunter’s Creation. This part of the menu is always rotating depending on what type of wild game is being offered.

Johnny Garlic’s is located in the back part of the Marketplace on Ming Avenue.