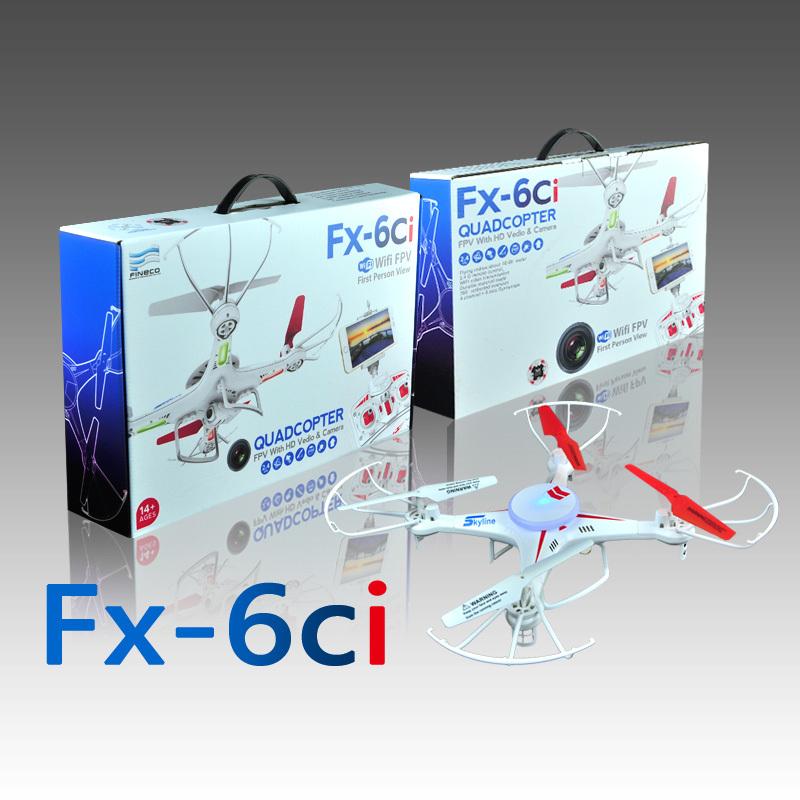 The FX-6ci is a remote controlled quadcopter (r/c quad) manufactured in China by Fineco ltd., a Chinese science and technology company. If you buy r/c quads and are familiar with websites that distribute them (gearbest.com, hobbyking.com, etc.) or have searched Amazon recently, you may have noticed it selling for about $30. Considering the average cost of other similar products on the market, I found the price very compelling especially considering that it has been advertised to incorporate at least one feature that is completely unheard of for less than $1000: “follow me.”

“Follow me” is a function commonly found in high-end drones designed to be used for sports photography and combat applications. It is not the kind of thing that one expects to see listed in the specifications for a device that costs the same as the Bakersfield College student parking permit. The basic idea is that the drone using its camera and other instruments, sometimes in conjunction with GPS-enabled technology and sometimes tracking device that the target wears like a watch.

My interest in drones and quadcopters is in terms applying them to journalism. Specifically, the idea that a drone might be able to assist me by documenting my experiences as I cover them and provide me with an unbroken record that I can to refer to as I write. Perhaps capturing moments photographically that have occurred at times when my camera was not actually in my hand. There are numerous other ways one could apply a small autonomous flying camera to journalism. Especially if one smiles at the thought of watching paparazzi “reporters” slowly disappear forever.

Therefore I was very curious to see just how well the FX-6ci could follow me, as it were. Before we get into my opinion of its novelties let me provide some statistical specifications for the record.

An included smartphone mount allows the user to at least feel like they are holding a high end controller with a built in flat screen.

I was somewhat disappointed with this product. While I knew it was unlikely to be capable of truly autonomous behavior, I had expected it be a little more practical. What Fineco is calling “follow me” is actually just a cleverly tweaked version of the well know industry standard “headless mode” technology which is designed to assist novice pilots and experienced photographers. The basic idea is to make learning to fly a quad or using one to do something other than fly while the craft is indeed flying. It provides a baseline set of directional parameters to the controller chip based usually on the crafts position right before take off. Once set, the craft no longer has a literal front or back, left or right. The onboard chip remembers what those parameters were before it took off and regardless of its current physical orientation continues to respond to commands from the controller in context with its memory. This is useful for beginner pilots who have not yet developed a strong sense of orientational awareness which, I can tell you from personal experience, can be the most difficult thing to overcome when you’re first flying your ships. It can be very frustrating especially if you’re a self-taught pilot. I think it behooves new pilots to avoid such crutches and simply apply themselves to developing a sense of situational awareness that includes remote object orientation. The more practical application of this technology is for photographers who need to maintain stable flight while reorienting the ship to aim the camera and line up their shots. An interesting consequence of this ability is that it can be exploited to make the completely brainless ship look pretty smart. Because the ship knows which way is “backwards” in terms of its original orientation it is possible to command it to stop and go “backwards” until it is within a certain range (very close) of its controller. This amusing quirk has been promoted as “one button return” technology by the industry in general and is laughably unreliable as a failsafe measure in case of aircraft loss.

Fineco has taken this exploit two steps further. The FX-6ci can be set to “headless mode” through an elaborate and sensitive calibration process. This process slaves the orientation of the craft with that of its controller. This provides a much more reliable return capability because rather than locking its orientation at the time of launch, it dynamically interprets information from the controller and maintains its orientation relative to that of the controller during flight. It can therefore be commanded to return to the controller and it actually does. This might be the only aspect of the FX-6ci’s various novelty features that I can say impresses me. Unfortunately, Fineco didn’t stop there. They exploited an interesting consequence of their version of the “headless mode” technology; under the right circumstances you can make it seem like it’s following you. Basically if you have your ship in the air set to “headless mode” after a very well executed calibration (they have designed the procedure to force the user to completely recalibrate both the ship and controller every single time you want to activate “headless mode”) and you press the auto-return button while holding the controller and walking around the ship will continue trying to return engendering the appearance of following you. The problem is that the ship does not have barometer or altimeter onboard and cannot maintain flight stability on its own in any way. So constant throttle control is necessary to keep the ship in the air. Additionally, the dynamic orientation control which makes it possible also makes it impossible. The second you turn around to walk away and let it follow you the ship will be updated with new information that flips its sense of direction because obviously the controller is now facing the other way and consequently it starts getting pretty loopy and don’t forget you have to maintain accurate throttle control during this process or it will just take a dive in short order. The practical reality is that if you want to use this “follow me” function, to make the ship follow you, then you must be prepared to walk backwards while concentrating on keeping your ship in the air through constant throttle manipulation.

That being said, I found that this disappointing poorly executed novelty function is the most impressive aspect of this product. The lights are bright and can be remotely controlled in case you want turn them on or off during flight. It has a circular object built in the top of its airframe that looks awfully like a GPS antenna, but is actually a platform for more lights which only burns up battery power providing additional drag characteristics. The segmented airframe is a good idea, but the included instructions don’t tell you how to take the airframe apart without damaging its component parts. The motors are underpowered and designed to use a very low end transmission system that has no concession for the protection of its fragile gears. Worst of all I found that its flight control system is “glitchy” for lack of a better term, by which I mean to say that from time to time it suddenly loses its controller connection and does absurd things like dropping almost to the deck from a stable flight and suddenly accelerating in random direction for no apparent reason. I would not recommend this product to beginners but experienced r/c hobbyists might find it useful as part of a scratch build or mod project.