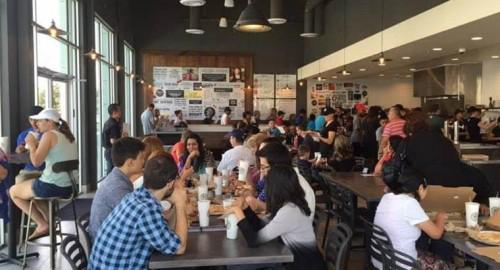 On Oct. 5, Pieology Pizzeria opened the doors to a second Bakersfield location at 5503 Calloway Drive. Their other location is at 6509 Panama Lane.

It didn’t officially have its real grand opening until the following day, though, and free pizza was cooked and given away to potential future customers. Water was served, but unfortunately no one could get soft drinks or try some of the alcohol they sell such as their collection of elegant-looking wines.

Pieology has the negative quality of being so similar to Boss Pizza, but it has positive and likable qualities, too. The new location has a decent atmosphere, and the pizzas served are rich tasting. If one can also get past having to stand in a long line waiting for personal pan size pizzas with regards to quantity, time, and prices, then one can truly enjoy pizza that is different and fun.

When people walk into the restaurant they’re greeted by a friendly staff ready to cook their food however they’d like their pizzas made. The tables and booths are limited, but they also have a nice outside patio for anyone that would prefer to eat outside or if inside seats are all taken by other customers. The lighting inside of the building is decent, so customers don’t have to worry about eating in an uncomfortable area where they can’t see what their number says on their order card.

The pizzas served to customers are exceptional and custom made. When a person stands in line to have a pizza made, the staff stands in an assembly fashion such as the kind one would expect in places like Subway. Customers first get to pick out their own choice of sauce from a variety of choices. That includes alfredo sauces and sauces without tomatoes.

The next two steps involve picking out cheeses, meats, veggies, fruits and other toppings in a logical way. Considering the different choices, it’s interesting how so many different combinations of pizza toppings can be made.

Customers can practically have any possible pizza style they can think of as long as they choose from whatever is an option on the menu. This means anyone who buys a pizza can literally invent their own topping recipe from available options and have a pizza they would not otherwise be able to buy anywhere else unless they chose to make their own pizza at home.

The only displeasing thing about Pieology Pizzeria is the size of their pizzas. Besides the pizza crusts being small, they’re thin. Some people prefer thin crusts, but this pizza would not be suitable for anyone that likes larger pizza or likes to eat a lot of food. If they want more they’ll have to order more, wait more, and pay more.