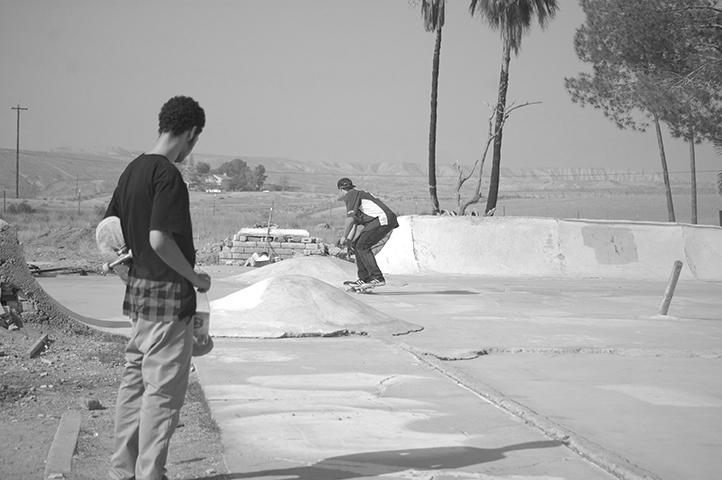 Last Saturday, I was able to go out and skate one of Bakersfield’s most secluded skate spots, Kernside. Kernside is a DIY (do it yourself) skate spot on the east side of town that was built by skaters. It featured aspects of transition skating, vert, and some street skating obstacles as well.

Since it was my first time at the spot, I wasn’t too sure how to feel in the beginning. There were tons of rocks and cracks that can easily lead to you being served up like a hot breakfast from IHOP. There were some other people skating the half pipe, and it seemed like every couple of minutes someone took a hard slam. One thing I took away from the experience is that if you’re going to skate at Kernside, you better be ready to fall.

One thing I disliked about Kernside is how much it favored transition and vert skating. People that don’t skate transition are going to have a boring time unless they’re willing to get out of their comfort zone and try something new. There were small aspects of street, one box and two curbs put together to form one singular long curb, but not that much. There’s nothing wrong with a spot favoring one style of skating, but I believe adding more street-style obstacles will attract more people to come.

Other than that, I really enjoyed skating at Kernside. I am someone who mainly skates street spots I find around town, or goes to Beach and Planz to skate. Going to Kernside with my small wheels definitely made it a challenge for me. I was forced to skate a style that I’m not very good at, and that’s OK. I was stoked to be able to go out there and skate something I don’t do on a regular basis; I feel like it made me a more well-rounded skater.

To say Kernside is fun is an understatement in my opinion, Kernside is a blast. I had a ton of fun going out there with my friends and skating. I felt like I was challenged in a new way by having to adjust from being someone who normally likes to hit stairs and ledges to skating some real transition. I believe that stepping out of your comfort zone and trying new things is essential to your progression as a skater, and Kernside did just that for me. I recommend anybody that is interested in skating transition to check it out.

Some tips I can pass on is to make sure someone in your group brings a push broom to sweep away the dust and rocks. You will have zero fun if you continuously hit a rock and get broke off. Also, it’s critical to bring lots of water. The nearest gas station is at least five miles away so you want to make sure you stay hydrated while shredding. I had a great time skating Kernside, and I know you will, too. So call your friends, grab your boards, and go shred!