Xeno-T satisfies my ears with joy 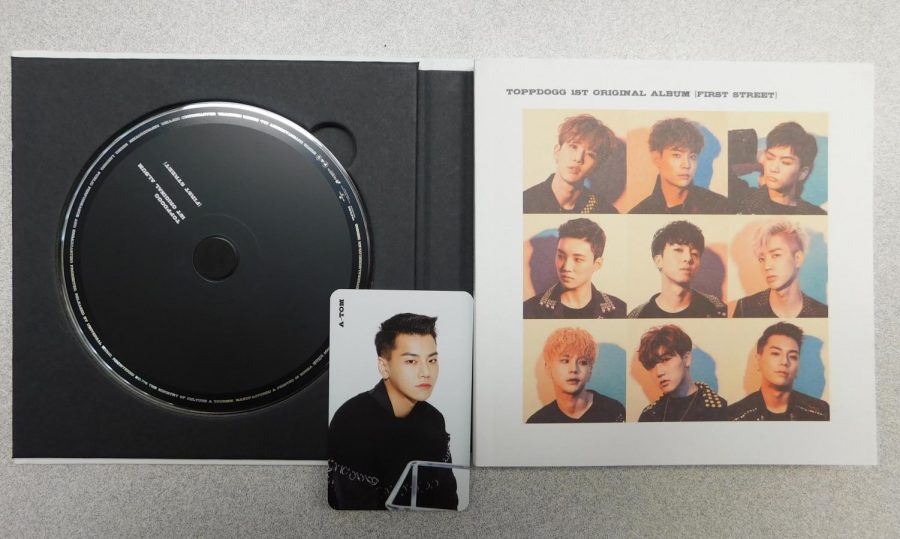 The physical copy of Topp Dogg's first original album "First Street" comes with the CD, a photo album, and a collectors card. I got former Topp Dogg member A-Tom.

Xeno-T, formerly known as Topp Dogg, have made adjustments since their debut in 2013. They went from having 13 in the beginning. Now they have 5 members looking for a new start, starting with changing their name as of Feb. 20. The company gave them the name “Xeno-T” by connecting Xenogeneic and Top-Class together.

Their music consists of rapping and singing. A plus to that is their flamboyant choreography and style. No matter how many members Xeno-T has/had, they seem to make it work 100 percent of the time.

Presently they have three singers: Hojoon, Sangdo, and B-Jyu. Then have two rappers, Xero and Sangwon, that add the spice to the songs.

“First Street” by Topp Dogg came out in 2016 and it was huge difference in style of music when I heard it at first because this album has a lot of melody and some upbeat songs. In comparison to some of their other albums, their music was more aggressive and upbeat. At the time “First Street” came out, they were down nine members in the group.

One of their most popular songs in this album is called “Rainy Day,” which is a sad love song about a guy that is being emotional from his past relationship. He describes love as “a monsoon that comes and goes” according to the translation. In the song, the rain is a metaphor to describe the woman. For insistence, in the lyrics it says, “when rain falls on my lips, it feels like I can catch you…”

The song does go on saying that he hates the rain because it keeps reminding him of her and that’s what he is trying to do.

A song that sounds like Topp Dogg is “Monologue.” This song is very groovy and it always makes me want to dance. Although, reading the lyrics, it seems like the listener is listening to a guy’s thoughts. In the song, it’s very direct like, “You’re just smiling, girl. Why am I the only one trembling? What is this? Who are you to do this? You keep doing this to my heart.”

When I got this album, I didn’t know what to expect because “First Street” can only be available just by CD and I didn’t want to spoil anything for myself when I got it. Though, the only song that I knew from this album was “Rainy Day.”

Listening to it through a couple of times, I have to say I like their more aggressive and upbeat sound; for me, that’s the Xeno-T [Topp Dogg] sound. However, I absolutely love this album because I can distinguish the singers and rappers voices from each other in a group of nine instead of a group of 13.

It been since 2016 since Xeno-T has created music for their fans “ToppKlass.” Nevertheless, Xeno-T never stop trying to expand themselves in any way possible. All of the members took place in a show called “The Unit,” a reality show, where only two of them made it. Hojoon and B-Jyu didn’t make it to the finals, but showed their talent on The Unit.

Xeno-T is currently planning to have a comeback around the beginning of March in Japan for their “New Start” [that is what they are labeling it]. I’m sure that “ToppKlass” are going to be supporting them every step of the way.