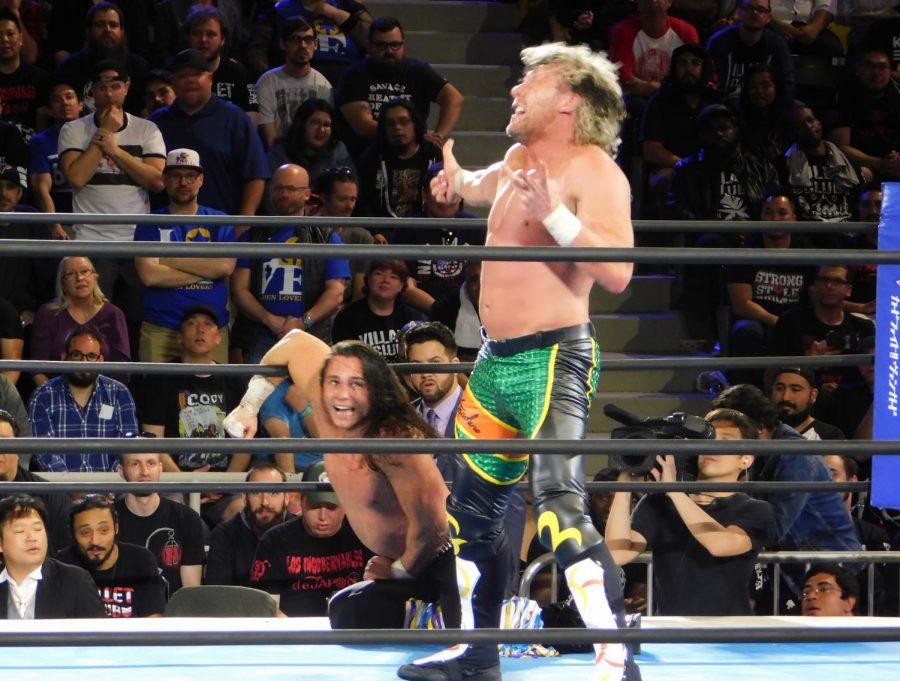 Kenny Omega getting ready to hit his finisher "V-Trigger" on his best friend Matt Jackson, one half of the Young Bucks

When going to watch a movie, a live act, or in this case a wrestling show and not knowing what’s about to happen, is probably the best way to enjoy anything.

New Japan Pro Wrestling (NJPW) presented Strong Style Evolved at the Walter Pyramid in Long Beach on March 25. With the doors opening at 3:30 p.m., the line for the show was wrap, not only around the Walter Pyramid, but it was going as far as to the parking lot.

My brother and I were waiting in line and next to the line was the merchandise table. I told him to wait in line while I went to go get merchandise. There was a variety of shirts to choose from, but I got the traditional “I was there” t-shirt with a few other ones. Since NJPW partnered with Hello Kitty, my brother got that t-shirt where the face was in USA colors instead of her white face.

The doors opened and I was ready to be a part of something big. However, I had to get through security check before I went through the big doors (safety first). They had separated the women from the men, so I ended up in the front of the line and entered first. Without waiting for my brother, I immediately went to the second merchandise table where they sold different and more merch. I ended up getting the big “Okada Dollar” towel. My brother had informed me that the towel had sold out when he got to the line, so I’m very fortunate to have gotten one.

In the show there were many tag team matches. The show started with a tag team match and ended with a tag team match. One of the matches that sticks out to me the most was Zack Sabre Jr. and Minoru Suzuki vs. Tomohiro Ishii and Hirooki Goto. The reason that match stood out to me was because of hard hitting forearms Ishii and Suzuki were giving each other. The crowd was so into that moment that they would “shhh” people, so a person can hear the hit of the devastating forearm. It gives me chills just thinking about it.

Even though that match was awesome, the show stealer of that night was definitely the main event with The Young Bucks (Nick and Matt Jackson) vs The Golden Lovers (Kenny Omega and Kota Ibushi). It was such a roller coaster match.

A simplified version of this storyline is that Kenny Omega and The Young Bucks are long time best friends. They even have a subgroup called “The Elite” and based a YouTube series off themselves named “Being The Elite.” On a show for NJPW/Ring of Honor, Omega said that The Golden Lovers were the best tag team in the world, which ticked Matt Jackson off and he came out with Nick Jackson saying that The Young Bucks are the best tag team.

The match could go on forever, and I wouldn’t be bored of it. I believe there was a chant that we chanted that expressed that, “fight forever.” From two tables breaking to the little details where Omega is close in doing his finisher to Matt Jackson, but refuses and then Jackson grabs his hand forcing Omega to do his “One-Winged Angel.” I can admit that I cried a bit when the match was over because it got me emotionally invested. Matt Jackson put it best, “…a great match should feel like you’re watching a movie.”

There’s was a person behind me that said to his friend, “I can see why you love wrestling.” I’m so glad that NJPW have decided to come back in early July.