A new take on the 90’s sitcom, “Sabrina the Teenage Witch,” took off on Netflix after its release. Though the new series features Sabrina (Kiernan Shipka), her aunts Hilda and Zelda (Lucy Davis and Miranda Otto), and her cat Salem – it is based on the 2014 comic of the same name, a darker version, and not merely a lighthearted remake of the old show.

The show takes on a similar tone as other Netflix originals like “Stranger Things” that balance horror and humor, something its companion show “Riverdale” didn’t do successfully. Because of the partnership between “The Chilling Adventures of Sabrina” and Netflix, the showrunners were allowed more freedom and openness with the content of the show.

Teenage Sabrina descends from a high-powered witch, her father, and a mortal human, her mother; because of this, she is faced with a choice about her “dark baptism,” the sacred religious-like ceremony of becoming a full witch. Sabrina is morally concerned about selling her soul and giving the dark lord dominion over her soul. If Sabrina chooses to live her life as a witch she will be forced to give up her mortal boyfriend Harvey Kinkle, (Ross Lynch) and friends, and the rest of her human obligations in exchange for power and a place a witchy boarding school.

The conflict brewing internally in Sabrina is occasionally put second to those human obligations. Sabrina’s sense of duty to her friends and her mortal life only adds to her indecision in becoming a full witch. Her high school life presents other issues with her friends, Rosalind Walker (Jaz Sinclair) and Susie Putman (Lachlan Watson), one who is repeatedly bullied and beat up by a group of boys at the school. Sabrina’s vocal anger and disgust at the misogynistic culture at her high school is a feeling shared by girls and women now. 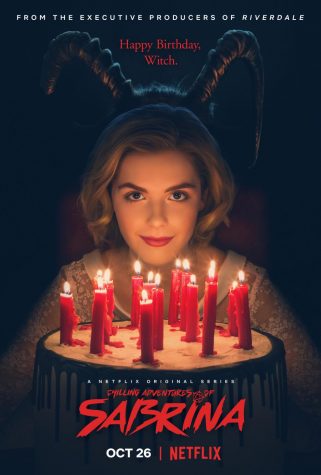 Beyond this, Sabrina has a trio of witch sisters (Tati Gabrielle, Adeline Rudolph, Abigail F. Cowen) pushing her to stay away from the previously mentioned witchy boarding school, something Sabrina was already on the fence about since the start. The conflict and turmoil between her two worlds – supernatural and mortal – starts to tangle when she enlists the help of the sisters to take care of the bullies at her school.

All Sabrina wants, and keeps striving to achieve, is living neither the life of a human or a witch, but both of her lives at once.

The show is set in an ambiguous time, featuring modern cell phones and references to modern films alongside old landline phones, and dated clothing and cars.

“The Chilling Adventures of Sabrina” is both theatrical and dramatic, and takes off steadily, in order to wrap up individual storylines as it moves forward with the larger plot of Sabrina’s end goal. The middle of the season has a filler feeling episode that doesn’t advance the overarching plot but does allow for some in-depth character development. In the weakest episode in the season, a sleep demon traps Sabrina and her family in dreams – forcing Sabrina to work on her own to free each of them.

Though “The Chilling Adventures of Sabrina” does feature strong and unique characters such as Sabrina Spellman herself, and her mystical and magical aunts, it does fail by falling into an old and overused wise elderly woman is a psychic trope when it introduces Ros’s psychic grandma who explains their power of “cunning,” something reminiscent of “The Shining.”

Through its strong moments, such as Sabrina’s close-knit family relationship and friendships, Shipka’s convincing and moving acting, to the show’s ability to show Harvey Kinkle’s emotions and weaknesses, “The Chilling Adventures of Sabrina,” is a refreshing and exciting, which makes its bad or weak moments easily forgettable and forgivable.