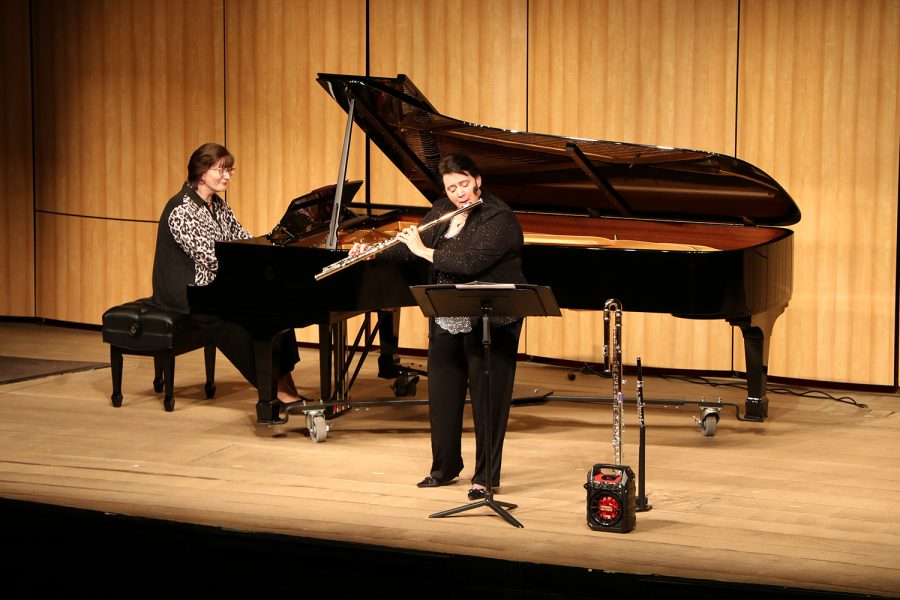 The Bakersfield College Performing Arts Center hosted a musical recital in the Indoor Theatre on Sept. 19. Students and staff participated in this first-of-its-kind musical event.

The talents of the BC staff radiated in the theatre, as many professors showed their best talents on stage. A majority of the performing professors were from the Fine Arts department.

Many accomplished musicians including Catherine Parnell, who attended Manhattan School of Music, were in attendance. Parnell was a highlight of the recital due to her charming voice and impressive octave range. Parnell’s talents aren’t contained to the classroom, but also extend to the stage.

Also performing was world-renowned flutist Tracy Harris. Harris is a dedicated soloist, chamber musician, flute clinician, author and adjudicator for both national and international competitions, according to Harris’s biography. She has been in numerous musical productions, including recording for Disney studios and PBS television.

Not only does Harris embrace audiences with her music, but she also teaches them.  Thousands of musicians all over the world receive guidance through her work like “Tracy Harris Flute Boot Clinics,” which offers musical lessons. Harris has also given classes at the prestigious performing arts at The Julliard School.

While working at BC, Harris directed the Wyndfall Flute orchestra. The orchestra won the prestigious National Flute Association Convention in 2014, a convention which hosts over 10,000 flutists from all over the country. Harris’s performances and musical attributions only reflect her talents.

The applause was heard all throughout the theatre as the show ended. Since this was the first time a show like this has ever been held, it encouraged professors to step out of their typical positions.

There was always an atmosphere of talent in the room no matter who was performing. The community really enjoyed the show, including sophomore Jaqueline Garcia who said, “I liked the show because the music was… really good and I got to see some professors I recognized.”