Jonas Brothers are back and never been better 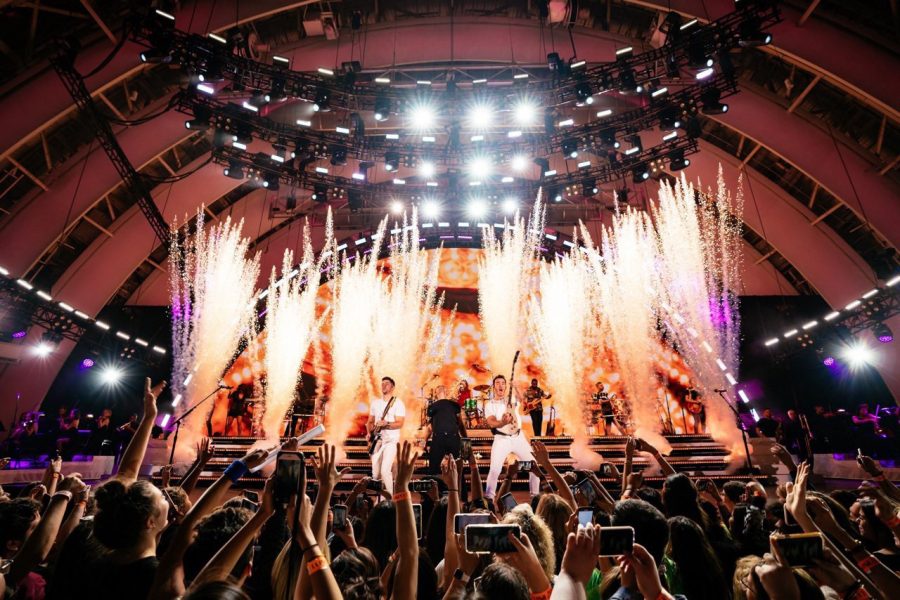 After experiencing the Jonas Brother’s “Happiness Begins” tour at the Hollywood Bowl on Oct. 20, I certainly still had the lovebug for them.

The Jonas Brothers are an American pop rock band formed in 2005 which consists of three brothers; Kevin, Joe, and Nick Jonas.

After taking a 6-year hiatus, the “Jo Bros” are back and have never been better.

It has been a huge year for the Jonas Brothers and especially for the fans.

Since they announced they’re back together in late February, the brothers have been unstoppable.

I’ve been waiting for this day for nearly ten years.

I couldn’t see them when I was ten. What ten-year-old has money to go to a concert. Not me.

Now that I’m in my early 20s, well, still no. I still didn’t have any money, but I still got tickets as a birthday gift.

Although the night before the concert I was stressing out and crying because I had nightmares that I missed the show, the emotions I felt during the show were just full of happiness.

They open up their set with the song “Rollercoaster,” off of their 2019 album. Which sent me on an emotional rollercoaster.

My eyes teared up a little. The song is about their journey since the fans last saw all three of the brothers performing together, which ties in perfectly to open up with.

The best songs to dance to was definitely “Only Human,” from “Happiness Begins” and Nick and Joe cover “Cake by the Ocean,” from Joe’s band DNCE. Fun fact, cake means butt.

The only disappointment I have from the show was how heartbroken I felt when they didn’t perform my favorite Jonas Brother’s song from their 2008 “A Little Bit Longer” album “Shelf.”

Overall, the show was amazing and I hope they’ll be back to announce another album and tour in the near future again without taking another six-year hiatus.

The first leg was the “Happiness Begins’ tour officially ended the next day at the Hollywood Bowl.

The set list was perfect for the old and new Jonas Brothers fans.

Jonas Brothers setlist: “Rollercoaster,” “S.O.S.“ ”Cool” “Only Human“ ”Strangers “”That’s Just the Way We Roll “”Fly With Me “”Used to Be “”Hesitate “”Hello Beautiful” (fan request) “Gotta Find You” (Camp Rock) “Jealous” (Nick Jonas cover) “Cake by the Ocean” (DNCE cover) “Comeback “”When You Look Me in the Eye “”I Believe”

Closing songs: “Burnin’ Up” and “Sucker.”