Sweet Beast is worth the treat 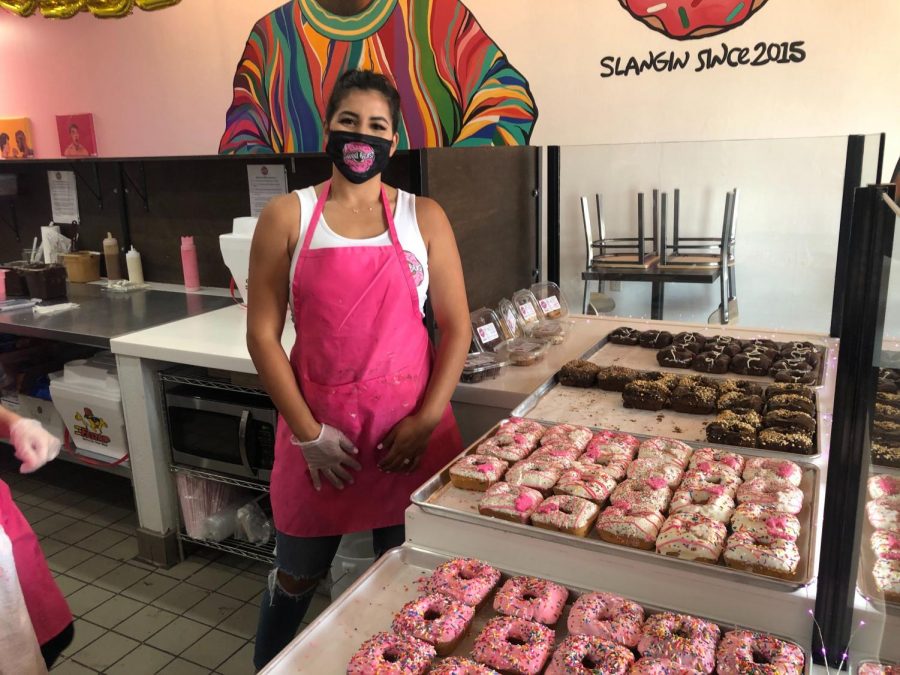 Owner of Sweet Beast Bakery, Melinda Chavez, posing with her donuts on the grand opening day on Sept.18.

As you walk into the Sweet Beast Bakery you are greeted by amazing murals of 2-Pac and Notorious B.I.G and the sweet smells of treats.
Sweet Beast Bakery opened on Sept. 18 and had a grand opening from 8 a.m. to 8 p.m. Located on 600 Coffee Road at the Frugatti Plaza.
They are a different bakery than the typical sugary donuts and coffee. They pride themselves on being healthy protein sweets. As their slogan states “Where the donuts flow and the guilt is no more.”
To walk into a place that has such an inviting smell is always nice, but to eat a donut that is different and to be satisfied rather than cautious is a whole different element of inviting.
The donut had a cakier texture compared to the regular fried donut, but each donut they made had a unique and different flavor. At $4.99 for each donut, you will not be disappointed. It is a splurge worth doing.
I was especially excited to try this place because I was able to share with a family member of mine that is diabetic.
Sweet Beast bakery lists all their donut ingredients on their website, as well as the different types of sweets they have. They also have vegan donuts for people to try.
It may be scary to try something different, but with an open mind, they will not disappoint.
While they had only about six types of donuts out, I was able to snag four of them and try them. Out of the four, the cookies and cream donut they had was delicious. While it had the traditional topping of something that was cookies and cream, the dough had an unexpected cinnamon flavor to it that was enjoyable. So, if you plan of going, try and get the cookies and cream donut.
The owners of the bakery were also present at the grand opening. They were both beaming and proud to say how much their business had grown since starting it down in San Diego in 2014. They are local to southern California. The husband is from Bakersfield and his wife is from Lamont.
Sweet Beast Bakery is definitely going for donuts at a different angle, but they are doing it gracefully and in such a yummy way.