The best beef jerky in California! 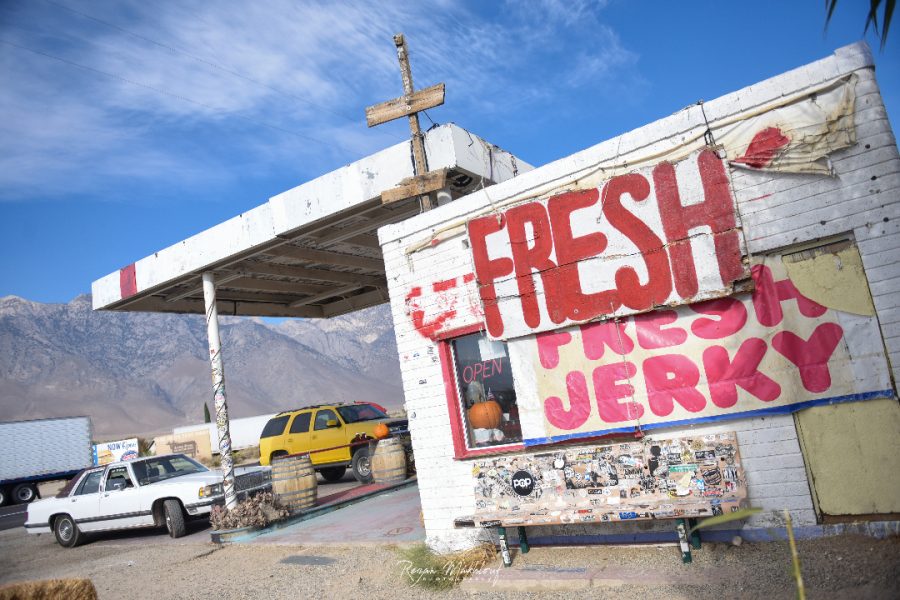 So, you are all packed up and ready to go on an adventure. You decide to go to either Death Valley National, Lake Tahoe, or maybe even Mammoth Lake. The iTunes list is loaded, the sunglasses are on, and you hit the road. Midway through your stomach starts to rumble. Snack time!

Right there on the side of the road, you are delighted to see the “FRESH JERKY” sign. Yes, that is right, Gus’s Beef Jerky on US-395 is the absolute perfect stop for all your hunger craves.

Established in 1996, this iconic jerky shack is one of the best in the country. Hundreds of thousands of people, including celebrities, make a stop to try their tender, flavorful jerky every year.

I had the pleasure of speaking to Gus’s daughter, Nancy Niepagen, who told me the story of her father. She said that her father began his business by picking up fresh fruits from downtown Los Angeles early in the morning, and set up his fruit stands on the road. He would drive anywhere he believed people would stop.

“One day a man in a wheelchair named Tony Langford stopped at one of his stands and told him you ought to be selling jerky, Americans love Jerky. That gave my dad an idea. He finally found a distributor who in hand began to work together to create the jerky we all love today.” Niepagen said.

As stated on their official website “Gus’s Fresh Jerky is made from only the best cuts of meat; marinated, seasoned, and vacuum–sealed to maintain freshness.

Gus produces fresh jerky every single week and has lots of flavors including Gus’s favorite BBQ. Keep in mind that BBQ jerky is only made on long holidays and weekends. Also, do not miss out on their popular top seller: Brisket jerky! It is soft and moist, almost like you are eating a steak.

Gus does not use preservatives in his jerky, and all of the ingredients are 100% natural. He also sells a variety of nuts, local honey, brittles, stuffed olives, and dried fruit.

Gus’s Beef Jerky’s oldest location is in Olancha, California. He and his family expanded to other locations including Golden Valley, AZ, and Searchlight, NV. His daughter Nancy recently opened a franchise in San Clemente, CA. “I hope to expand and make Gus’ Jerky a household name in all of the United States,” she said.