BC soccer responds with 6-0 victory 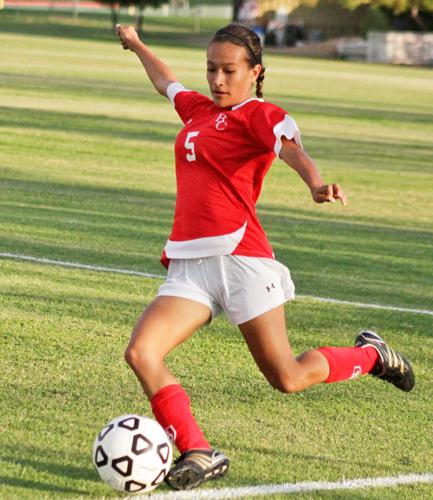 After coming off a 1-0 loss against Santa Monica on Oct. 9, the Bakersfield College soccer team snapped a four game losing streak with a 6-0 victory over Los Angeles Valley College on Oct. 12.

BC got its first win after having not won a game since defeating West Los Angeles College on Sept. 25.

Midfielder Morgan Butterbredt got the hat trick for BC with three goals scored and was very excited to get a win and be back at a .500 win percentage.  She said that it was very important for the team to come out and pick up a victory.

She said, before the game, the team watched lots of tape and was very motivated to come out and play a good game.

“We watched lots of film before the game and we were really pumped in warm up.

“It just felt great to come out and win it, because we’ve been looking forward to it,” she said.

She also talked about what it meant to get off the losing streak.

“It feels great; we’ve all been talking about how we wanted to get off this losing streak,” she said, on the feeling of getting a win, after a four-game skid.

Butterbredt was responsible for three of BC’s six goals that were scored.

She explained that she hasn’t scored any goals lately, so she was very excited to have gotten three against LA Valley.

“It felt great, I am so extremely happy,” she said. “I haven’t scored in a while and it just felt great.”

Going into the L.A. Valley game BC had been outscored 11-2 during its losing streak, and was able to score three goals alone in the first half.

BC is now 6-6 on the season and 2-4 in the Western State Conference.

“We’ve been struggling to find the net. We’ve been playing well, but struggled to find the net,” BC’s coach Scott Dameron said, on what the win meant for his team and scoring six goals against L.A. Valley.

“Scoring the early goal I think took some pressure off, once we kind of relaxed a little bit the goals just started happening,” Dameron said.

“Basically it’s just that, I’m not really worried about the end yet. I’m just worrying about the game that we’re playing,” said Dameron on the end of the first half of conference games.

Dameron said it is unlikely that forward Halle Meadows would be able to return this season after suffering a fractured tibia in the Sept. 14 game against Solano College.

BC’s next scheduled game will be at home against West L.A. on Oct. 19.