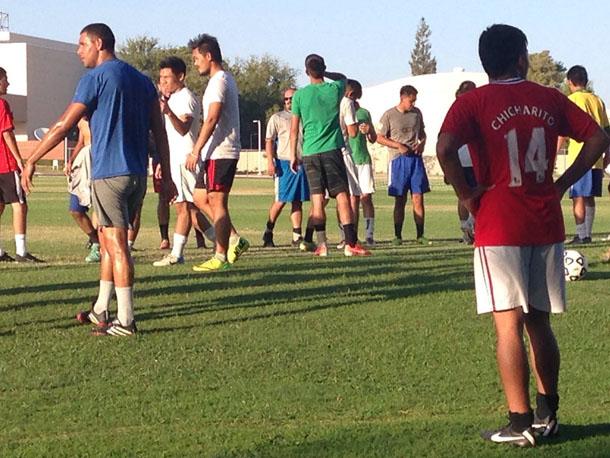 On Thursday, Sept. 4, the Bakersfield College men’s soccer club took to the field as the club held its annual tryouts. Over 50 current BC students attended the tryouts in hopes of representing the club during regular season play. The tryout session began with six laps around the soccer field, equivalent to two miles.

After the two-mile conditioning period, the potential BC soccer prospects took a quick water break, which was followed by more instructions from the coaching staff.

The players were separated into four groups, setting up 30-minute scrimmage games on both soccer fields full of competition.

Scott Dameron, the Bakersfield College woman’s soccer coach was in attendance as part of the coaching staff. “We got to hurry up and narrow down the group because we play in four weeks,” Dameron said.

When asked about a deadline, coach Dameron insisted that it was up to the coaching staff to decide, but there was no deadline at the moment.

“If we can narrow it down to a group we like we can go from there… we just have to make sure who’s eligible and things like that,” added Dameron.

In order for BC students to qualify as part of the soccer club they would have to be enrolled in at least six units at BC.

The BC men’s soccer club is part of the West Coast Soccer Association and plays out of the 2nd Division Cal Central division. The club will release their training schedule soon and their first game is Oct. 4 against Loyola Marymount University soccer club at a location yet to be released.

Dameron noted that BC students are very passionate about trying to bring back a men’s soccer team to Bakersfield College. “We love seeing so much passion from all the guys, and it’s very encouraging that there are so many players that are so into soccer on campus.”

“That’s their goal,” Dameron said about the current students who are trying to bring BC a men’s team. “They would all love to play soccer officially for BC,” Dameron said