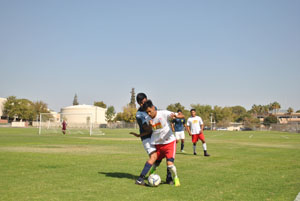 Bakersfield College men’s soccer club was scheduled to host a game at the BC soccer fields Oct. 18 versus UC Irvine, but because of miscommunications with the referees, which contributed to a no-show by the ref’s, the match was forfeited by BC men’s soccer club.

The match was set to start at 1 p.m. but when it was noticed that the referees would not show up both teams decided to play a 45-minute scrimmage game.

The scrimmage game ended with BC losing 1 to 0.

The BC men’s soccer club is sitting in last place of the Cal Central 2nd Division at 0-3.

Aaron Morgan, Defender, for BC said, “From what I saw our game has gotten a little better…but there are mistakes in the backfield that caused us the game.”

This is an adjustment that Morgan and his teammates hope to improve on moving forward.

With one game remaining on the schedule against Pepperdine University the club will have to play without current head coach Pete Fox.

“He dropped the bomb on us and told us he has a brain tumor,” Morgan said. Coach Fox went in to surgery Oct. 20 and is scheduled to miss the rest of the season.

The BC men’s soccer club’s final game against Pepperdine University is scheduled to be played on Oct. 25 at 1 p.m. on the road.