Renegades drop to Riverside 33-14 in season-opener 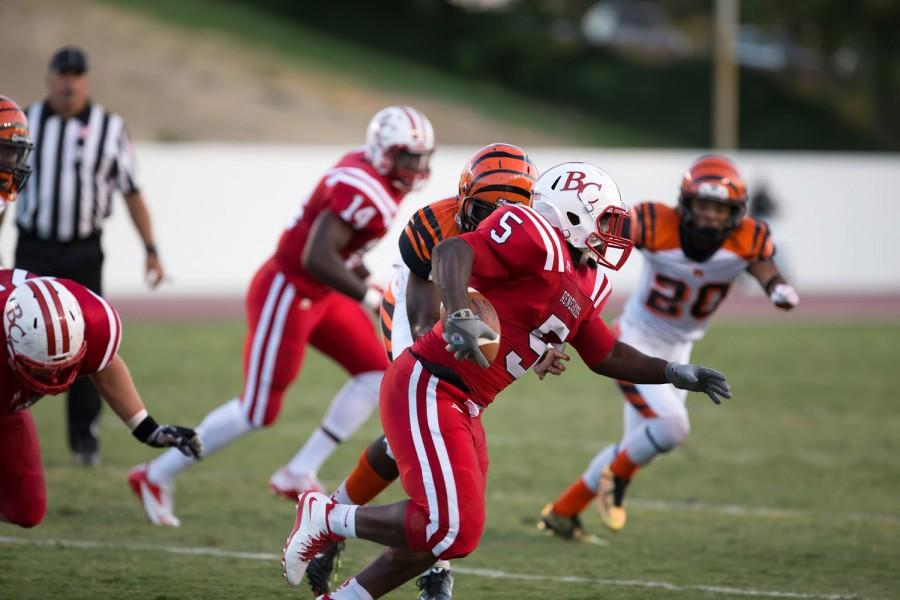 BC running back Curtis McGregor couldn't find his rhythm against the big, fast Riverside defense in his first game back after missing mostly all of last season.

On the opening night of football at Memorial Stadium’s 60-year anniversary, it was Riverside City College who spoiled the evening, beating Bakersfield College 33-14 in front of approximately 5,000 fans.

Riverside jumped out to an early 3-0 lead on its 12-play, 58-yard opening drive which capped off with an Aidan McCarley 35-yard field goal. The Tigers found themselves driving again shortly after as they recovered a fumble off a botched snap deep in Renegade territory.

BC did manage to hold RCC to another field goal at the 9:54 mark in the first quarter to still make it a one-possession game, but the offense couldn’t get it going.

BC quarterback Tarek Yaeggi lost the ball on the ensuing drive to setup a short field for the Tigers to work with.

“We didn’t protect the ball early on so we got put in a hole against a very quality football team,” head coach Jeff Chudy said.

RCC capitalized on a touchdown run by Fresno State bounce-back Dontel James giving the Tigers a 13-0 lead with 10 of those points coming off of BC turnovers.

James finished the night with two touchdowns on 18 rushes for 87 yards while his running mate Christopher Anderson added 93 more yards on the ground on 22 carries to help the Tigers outrush the Renegades, 255-78.

In his debut after missing just about all of last year, BC running back Curtis McGregor finished with 44 yards on 11 rushes. After the game, McGregor was hobbling around with what seemed to be slight ankle discomfort.

After one quarter of play, the Renegades finished with just 33 total yards offensively and zero first down conversions, while giving up 158 yards and 13 first downs to the Tigers.

Riverside’s James opened up the second quarter with another short touchdown run in a well put together drive by quarterback Ian Fieber (14 plays-90 yards) to extend the lead to 20-0.

Just before the two-minute mark in the half, however, Bakersfield finally got on board as running back Isaiah Sharp finished an 11-play, 67-yard Renegade drive with a two-yard touchdown cutting it to a 13-point deficit.

RCC’s backup quarterback Kevin Olsen (brother of Carolina Panthers’ Greg Olsen) came in early in the second to replace Fieber. Olsen went 7-for-9 for 84 yards and despite throwing an interception to BC’s Dominic Frasch, capped off a nine-play, 83-yard drive with a 12-yard touchdown pass to Durron Burton. A missed PAT by McCarley made it a 26-7 Tigers lead with 17 seconds remaining.

With those 17 seconds, RCC still made it enough time to get the ball back and on the board.

On the following return, Frasch received it back on the goal line and as he looked to cross the 20-yard line got the ball stripped by Riverside’s Shiloh Pritchard who returned it 18 yards for eventually what would become RCC’s last scoring play.

The Tigers went into the half in complete control 33-7.

“The first half wasn’t what we wanted,” Frasch stated. “We expect more.”

In the second half, the Renegades did manage to add some extra points as Yaeggi hooked up with tight end Dillen Littles on a short three-yard pass to make it 33-14 with 27 seconds to go in the third quarter.

Yaeggi finished with 142 yards, completing 18 of his 30 attempts for one touchdown to go along with one interception.

“We got a lot of growing up to do and we understand that,” Yaeggi said. “We got a lot of room for improvement…when you face a team that is that great you’re going to have miscues.”

“I think the thing we can take from it is we had some guys who competed…we just weren’t very efficient at what we were doing at times but we hung in there.”