Clark takes his roots to Greece 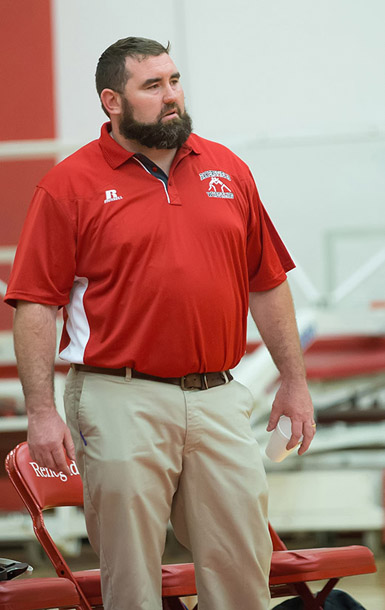 Coach Brett Clark is one of 60 wrestlers getting to represent the United States in the Veterans Wrestling World Championships.

Wrestling is a sport that has a rich history – and in Greece – wrestling was born with the help of the Olympics, which took place in ancient Olympia (708 B.C.) and Athens (1896), and enthusiasm for the sport has yet to decline centuries later.

For Bakersfield College head wrestling coach Brett Clark, wrestling also has a rich history within his family and his love for it is soon taking him to where the sport prospered.

Clark, 38, will be competing next month in the Veterans World Wrestling Championships in Athens, Greece.

In what started as a bonding trip last year with him and his 9-year-old son Jason, who complained about how he wanted to see his father wrestle, they decided to head out to Las Vegas where Brett competed in the National Veterans Wrestling Championships while Jason also had his own tournament.

Clark ended up losing his first match, which was Greco-Roman style (forbids attacks below the waist).

“He [Jason] watched me lose and that was the kind of thing for him to cry when he loses, I looked at him and said, ‘Am I crying? It’s no big deal,” Clark said. “I got to get up and wrestle again in the next tournament.’ ”

Clark won the next match, which was freestyle against the same guy he lost to in Greco-Roman the day before.

Eventually landing the BC head coaching vacancy last year following the tournament, it gave Clark an opportunity to train with younger, more polished guys who move around well.

His wrestling buddies, better known as Team Fluffy, complimented Clark on his physical appearance stating how Clark “looks so much better this year.” That proved to be the case at this year’s National Veterans Wrestling Championships where Clark won every Greco-Roman match by technical fall besides one but still won, as well as placing first in freestyle.

The sport of wrestling has been around Clark’s life since he was nine because his dad was a wrestler as well.

Seeing how wrestling is passing on from him to his son is what continues to push him.

A Bakersfield native, Clark will be joined with a few other local wrestlers and a total of 60 representatives of the United States at the Veterans World Wrestling Championships.

“It’s a big thing for us,” Clark said on embracing this upcoming quest. “It keeps us involved in the sport – not just the coaching aspect – but the competitive aspect.

Clark went on to say, “I want to represent Bakersfield…I think we have a good history of wrestling in this community.”

Although Clark is quite nervous about his uncertainty of whom he may face, it’s going to be the flight that will be harder to deal with.

BC’s wrestling team will have an all-day tournament at Modesto on Oct. 10 meaning Clark will get back to town late that night and he will depart to LAX around 5 a.m. Sunday morning en route to Greece – a 14-hour flight.

Clark is expecting to weigh-in at around 278 pounds. Weigh-ins will take place on Wednesday and he will wrestle on Thursday, followed by another weigh-in the next day and the Greco-Roman competition on Saturday.

Clark will miss time away from the team and most importantly, his family.

“This was questionable,” Clark stated. “I had to think about it. Leaving my wife with four kids (including an addition of a newborn girl). I get a lot of support from them, fortunately.”

Also raising a question was the expense that goes along with the travel and competition.

Clark is willing to spend money out of pocket due to the experience of being able to wrestle on a worldwide level, but help is always encouraged.

Clark has a GoFundMe page (www.gofundme.com/v3kd5td5s), which is near halfway of his goal of $4,000, where donations are accepted to help Clark get to Athens without paying out of pocket.

Clark’s message is simple, particularly for his son Jason to take notice: “If you work hard, you can accomplish anything.”