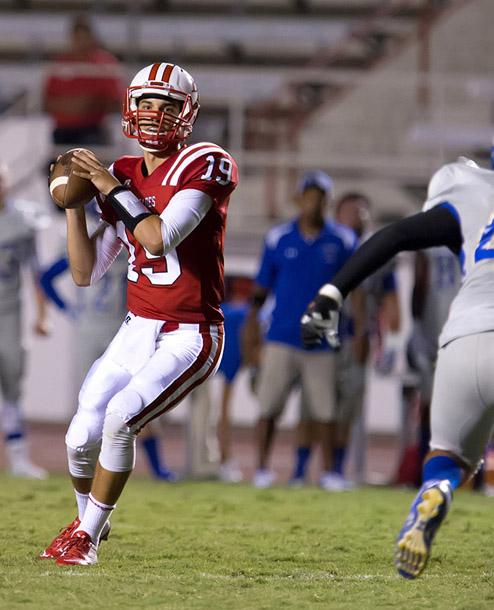 In his first start for BC on Sept. 26 against Allan Hancock, quarterback Dalton Gallis finished with 256 yards and four touchdowns on 16-for-27 completions.

It has been a continuous uphill battle for the Bakersfield College football program as it has yet to get its first win of the season.

The 0-5 mark sets a school record for worst start in program history.

Conference losses to Allan Hancock on Sept. 26 and College of the Canyons on Oct. 3 proved a different story, however, as opposed to the previous three games in large part to freshman Dalton Gallis’ arrival.

The 6-foot-3 quarterback out of Kern Valley High School added fuel to a fire that hadn’t been spreading.

In his first start in Week 3 at home against Allan Hancock, Gallis finished with 256 yards and four touchdowns on 16-for-27 passing with no interceptions.

Despite the performance, costly miscues by the freshman quarterback led to another loss for the Renegades as the Bulldogs (3-1 overall, 1-0 National Northern Conference) survived a scare, beating BC 39-35.

“I think he did some good things and managed well,” quarterbacks coach and offensive coordinator Carl Dean said following the loss.

It was Hancock’s Dy’Kari Hickey who managed to pose a threat as his fourth touchdown of the day – set up by a 96-yard kick return from Malik Williams – turned BC’s only lead of the season to a deficit and ultimately another loss.

The Renegades’ Curtis McGregor found some flow finally as he finished the evening with 158 all-purpose yards and three total touchdowns in the losing effort.

“There isn’t any one person that’s why we’re at where we’re at,” head coach Jeff Chudy said. “We’re all in this together…we made too many mistakes.”

The mistakes are cutting back, but they’re ultimately still the reasons as to why BC can’t get passed the hump and end this losing skid – that along with digging itself in a hole early on – which proved to be the case at Canyons on Oct. 3.

Down 13-0 midway through the second, BC finally got on the board as Gallis found sophomore wide receiver David Ross for an 88-yard touchdown.

It was Gallis’ only touchdown pass of the day, but he added the team’s only other points on the ground at the 6:36 mark when he ran the ball in for a one-yard touchdown.

For the Cougars, it was their dual-threat quarterback Devon Dunn who couldn’t be maintained.

Dunn finished with 254 yards passing on 20-for-31 attempts and three touchdowns, while running for 43 yards.

BC had multiple chances in the game to regain possession of the ball down 20-14, but key third down conversions once again for BC’s oppositions kept the offense off the field with time running out.

On a third-and-11 for Canyons with about four minutes remaining in regulation, Dunn seemed to have continued the play after the whistle was blown for a false start, but BC linebacker Joseph Hurtado hit him afterward and another flag was thrown for unsportsmanlike conduct giving the Cougars a first down and the control of the clock to kill.

The Cougars remained undefeated and BC remained winless as Canyons won 20-14.

The biggest loss for BC wasn’t the game, but the loss of defensive backs Terrance Young and Dominic Frasch.

Young sustained a neck injury and was carted off on a stretcher. He spent the weekend at a local hospital.

His condition is unknown but more information will be released on therip.com.

For second-leading tackler Frasch, he left early in the game following an interception and didn’t return.

The NNC is the only conference in the state with three winless teams, so chances still remain for the Renegades to climb up in the standings.