Cerritos crushes BC 28-0; first shutout loss for BC in 4 years 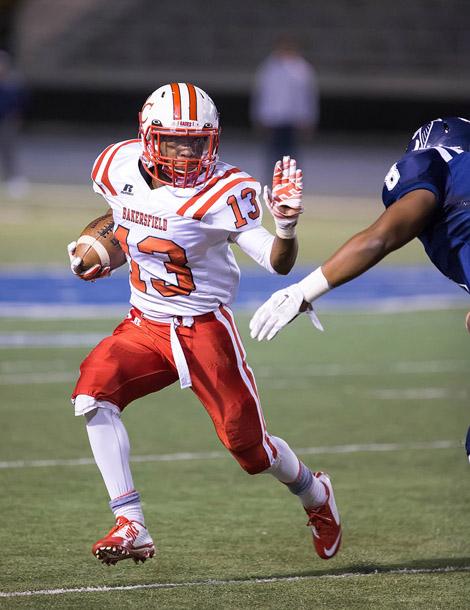 Bc's Cory Frison carried most of the load offensively, but it wasn't enough for the Renegades against Cerritos on Oct. 24.

It’s a later-than-average bye week for the Renegades.

Nevertheless, it’s a much-needed one.

BC (1-7 overall, 1-3 National Northern Conference) has plowed through a rollercoaster ride that Halloween had to stop.

The nightmare season continued at Cerritos prior to the Week 9 bye, resulting in a 28-0 loss to the Falcons – BC’s first shutout loss since 2011.

Cerritos came into the season ranked sixth in the nation according to JCGridiron.com and 10th in the California Community College Athletics Association state preseason rankings selected by coaches, but BC was right behind at 31st via JCGridiron and 13th by CCCAA.

For sophomore Bryson Briggs, who had a team-high eight tackles and an interception, this wasn’t how he envisioned things to unravel coming off of last season’s late heroics.

“We thought we had momentum from how we ended things last year. For us sophomores, we have two chances…there’s nothing you can do about it now or next year since we wont be here, but it’s disappointing.”

Both teams ultimately are subject to living up to the expectations throughout the season but BC’s journey took a turn for the worse.

It was evident this Cerritos team (7-2, 4-1 NNC), now ranked sixth in the CCCAA’s Nov. 2 regional rankings and atop of the conference standings, was going to use this game against the Renegades on Oct. 24 to prepare themselves for the postseason.

A 28-0 shutout, however – perhaps many didn’t see coming – especially not after BC just earned its first victory of the season the week before.

It was all Cerritos early in the game.

On its second drive, Cerritos capped off a five-play, 44-yard drive with a Kishawn Holmes 10-yard touchdown, and on the ensuing BC drive, the Falcons forced a fumble and Cerritos’ Alonzo Hansen returned it for a 14-yard touchdown, giving Cerritos the 14-0 lead midway through the first quarter.

Holmes finished the night with 17 carries for 71 yards and two touchdowns, while accounting for three catches for 26 yards and one touchdown. Walker struggled against the BC defense as he went 13-for-26 for 190 yards to go along with one touchdown and two interceptions.

“We made some big mistakes,” Briggs said. “You just can’t blame one aspect of the game, it was a team loss.”

BC totaled for just 170 yards of total offense, but once again another injury set the offense back.

This time it was quarterback Dalton Gallis as he sustained an injury to his throwing shoulder, and later, running back Curtis McGregor, forcing BC to play without two of its more prominent threats.

Briggs mentioned how head coach Jeff Chudy stated “there is a little small army of people in the training room” throughout the week.

For Briggs and the numerous sophomores, there are two winnable games ahead of them to head out on the right note.

The Renegades will host Pasadena (2-7, 0-5 NNC) in its final home game before the season finale at rival Ventura (5-3, 3-1 NNC) who is looking to claim a spot in the postseason.

“The game versus Pasadena should boost the moral going into the Ventura game which everybody is looking forward to. That’s going to be a huge game, it’s a chance for us to ruin their season possibly.”