Volleyball pushes to get into playoffs 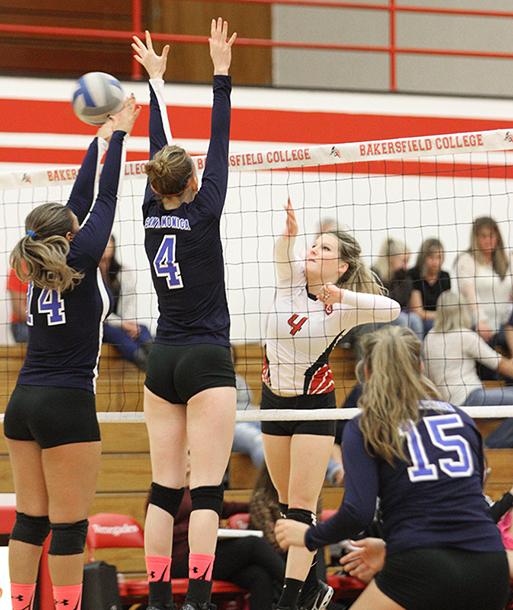 The Bakersfield College women’s volleyball team continued its late season push to make the playoffs as they hosted Santa Monica College on Oct 30.

BC entered the day in third place in the Western State Conference-South Division with an overall record of 11-10 and a 4-3 record in league play and three games remaining on its schedule.

Only holding a one game lead over Antelope Valley, BC needs to win the rest of its matches to secure a playoff spot. Coach Carl Ferreira emphasized the importance of every game.

“We just have to win,” he said. “Every match matters this late in the season. I just want the girls to understand that every match is important. Once a match is over, the next one becomes the most important match of the season.”

“Last time it was nip-and-tuck. Each game was decided by three points or less so we knew we just had to get after them early and not give them a chance to stay in the match at all,” said sophomore Daryan Heathcott.

BC did just that, opening up the match by scoring 10 of the first 15 points, giving BC the early lead 10-5.

However, Santa Monica rallied to tie the score at 15-15, as they would capitalize on three BC serving errors.

The score remained close with the teams exchanging points back and forth.

Ferreira called a timeout at 18-18 to calm his team.

“I just wanted to get the ladies’ attention, and we were making a few errors that I thought needed fixing so I called the timeout,” Ferreira said.

Ferreira’s instincts proved to be correct as BC would only surrender two more points winning the set with a score of 25-20.

Carrying over its strong finish from the first match, BC would eventually sweep Santa Monica with scores of 25-18 and 25-20, respectively.

The scores, however, were misleading as BC emptied its bench in the third set as the team pulled away to an early 15-7 lead.

“We always like to get everyone in but sometimes that’s not the case. I’m glad we had a chance to do that tonight,” said Ferreira.

The win keeps BC in third place in the standings as the team readies for its rematch against Antelope Valley on Nov. 6.

However, BC has had struggles on the road  with a 2-5 record.

Ferreira knows his team will have to bring a different energy than they had in previous away matches.

“Well, we just got our first conference road win against Glendale College on Oct. 28, so I just feel like we need to bring a little more this time. Winning on the road is totally different but these girls can handle it,” said Ferreira.