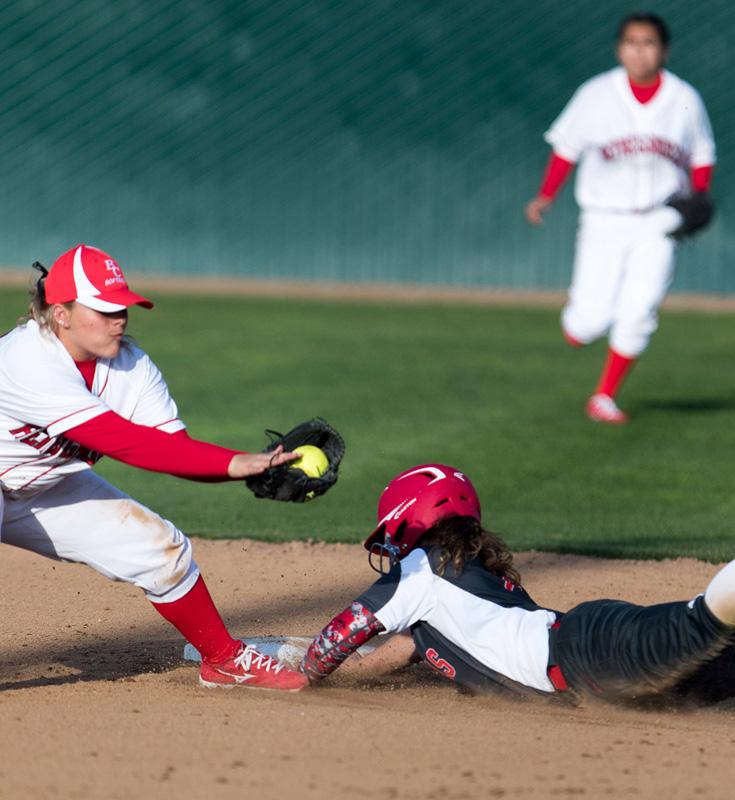 Bakersfield College’s softball team has high hopes this season despite starting the season 0-2.

“We’re doing a lot of defensive stuff, working on runners on bases and live batting practice from our own pitching staff,” head coach Christie Hill said.

In the opening game of a doubleheader for the Renegades, BC faced Fresno City College here at home on Jan. 28.

Hill’s main focus coming into the season was getting the best out of her players. “I’m hoping that our kids come out and play strong,” she said. “That they go out with confidence and play to the best of their abilities.”

Last year, BC beat Fresno City but Hill knew it would be a challenge coming in.

“We beat them at their place last year, so they’re going to be tough competition,” she said.

Right off the bat, the Rams opened up the first inning with four runs. After the third inning, Fresno was leading 9-0 before BC finally got on the board in the bottom of the fourth behind Jannelle Gutierrez’s run off of Karlee Goolsby’s RBI single, but the Rams would hang on to win 9-1.

“I was expecting a little better results. I think we came out flat. We didn’t play with any energy. We didn’t make any adjustments at the plate. Defensively, we struggled a little bit. I think that nerves got the best of us. I didn’t expect us to play that bad, though. I expected us to play a lot better, though.”

In the second game, BC faced the state’s preseason fourth-ranked team Sierra College from Rocklin north of Sacramento.

Sierra, similarly to Fresno in the previous game against BC, built a quick lead after one inning, 5-1. Trinidad Lee homered in the bottom of the first and got the Renegades on board.

BC would then give up four more runs in the second and third innings to give Sierra the 9-1 lead.

However, the Renegades would rally back in the fifth inning with three straight runs from Cassandra Sanchez, who went 2-for-3 for the game, along with Lee and Alyssa Ruiz to make it 9-4.  That would be as close as the Renegades could get as they gave up a run late in the game and lost their second straight game of the day, 10-5.

“We started a little flat, but in the last four innings of that game, we started making adjustments at the plate, and we kind of found some life in our bats.”

She also said, “I know starting off with the fourth team in the state on opening was kind of throwing the kids to the wolves, but it was a good test for my kids, though. If they want to make it to postseason and make it to state, that’s the type of competition they’re going to see.”

Following the Ventura game on Feb. 2, the team will travel to San Bernardino on Feb. 5, return home to face College of the Sequoias on Feb. 9, and then to Cuesta to face the state’s 11th team, Sacramento City, and Cuesta on Feb. 12.