BC men’s hoops season in review 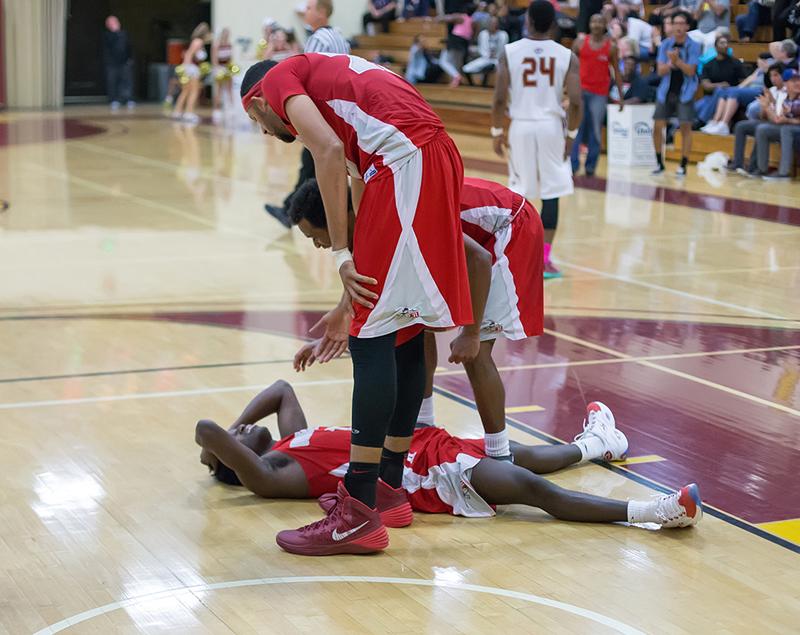 Perhaps a little extra mustard from Jameik Riviere’s potential game-winning floater at the buzzer to beat top-seeded Saddleback in the third round of the Southern California regional playoffs on March 2 could have been picture-perfect, but the Bakersfield College men’s basketball program couldn’t have drawn up a more impressive season.

Their offensive efficiency was captivating, as they averaged 82.9 points per game, good enough for 8th best in the state; all while holding teams to 69.6 points per game on 40.3 percent shooting, which was 10th-ranked over the season.

Defensively, they could cover a lot of ground while also matching up with opposing teams’ big men and slowing down quick guards, as they forced 16 turnovers per game – also 8th best in the state.

This combination for the Renegades would help carry head coach Rich Hughes – and even as a No. 9 seed – forbid them from being overlooked and overshadowed.

BC took the defending state champions, Saddleback, down to the wire and into overtime, but they didn’t back down from the punches.

The pace was in favor of the Gauchos, who prefer to slow it down, but BC rose to the challenge and kept it tight.

In the end, the Gauchos would survive 64-56, eventually reaching the state championship game (lost to City College of San Francisco 68-57 on March 13), but an indicator that Hughes and BC can play with the best of the best.

Question: Since the March 2 overtime loss to top-seeded Saddleback, when you reflect back at the overall success of the team finishing 24-6 and winning conference, are you satisfied with how the season played out Coach Hughes?

Answer: “It was a great season for us. We were also very, very disappointed that we weren’t able to finish them [Saddleback] off and continue on that trek because we felt like we had the ability to win it.”

Q: The game was tied at 50, your ball with seconds remaining, and a chance to finish off Saddleback. Looking at how close Riviere’s shot was from going in, is it still hard to grasp?

A: “Everyday I’ve thought about it (since). I think it would have been easier to handle if we just got beat like a drum and just hammered, (then) to lose the way we lost where it was tougher because you knew you were going to have to beat them, and you were a half-inch away from going our way and we win the game. He [Riviere] hits that shot and everything changes; you’re not thinking about previous plays… it (was) so close, you could taste the celebration.”

Q: How about the overtime period? You guys came into this game with a 3-0 record in overtime games this season, but with the most important game on the line, what went in favor of Saddleback outside of Dickson fouling out?

Q: The home court advantage during the regular season played a role as you guys finished 10-0 here at home. With the strength of the Western State Conference – South, how important was it to control your floor en route to a conference championship?

A: “To win our conference, whether it’s outright or shared, is a great accomplishment. I was proud of our guys. Our guys were able to do it by a landslide, and they pretty much just ran through the conference. We had a lot of good things that happened this year.”

Q: You lose a lot of guys this upcoming year (which includes All-WSC honorees and All-State honorees), but to still be able to have Shane Christie and James Pendleton (both honorable mentions) set to return, is there going to be a heavy transition heading into next season?

A: “We do have a good group coming back. We got to bring some guys in to go with what’s coming back. Obviously we lose two big positions (point guard and center) so that’s going to be something that we have to really be on our game recruiting wise to replace it.”

Q: With the showcase for the sophomores (which was the weekend of March 11), what are you hoping some of your guys get out of that weekend?

A: “I think it will be good. I know a lot of our guys have gotten phone calls and people who are interested. Obviously we have seven guys hopefully who we can move on – a lot of that will be contingent on academics, so hopefully we stay on top of that… it’s a good little finale for them.”

Q: Who impressed you the most this season (as players)?

A: “I think James [Pendleton] came the farthest as far as just his approach. He, at the beginning of the year, sometimes, just was (emotional) and as the year progressed he got better and started gaining confidence in himself (basketball and academically) on what’s he’s doing.”