BC baseball wins five of its last six 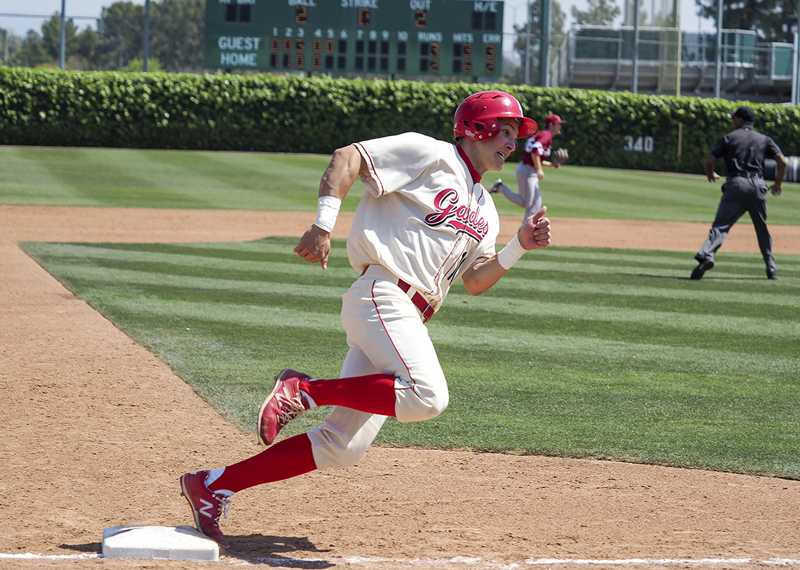 The Bakersfield College baseball team is 6-3 over their last nine games, which includes a four-game winning streak.

After losing two out of three to Glendale College, the team would rally to sweep Antelope Valley in all three games. With the wins over their Western State Conference-South counterparts, the Renegades moved to 15-9 overall and 6-3 in WSC play.

BC beat Antelope Valley 4-1 in the first game of the series on March 29.

Hudson Hartley started for BC and he got the win. Hartley pitched eight scoreless innings, giving up five hits while striking out eight. Luke Andrews pitched the ninth inning and got the save. Andrews gave up one run in the ninth.

BC went on to beat Antelope Valley 6-1 in the second game of the series on March 31.

Monty Stevens was on tab to start the day for the Renegades pitching a strong seven innings, yielding only one run on six hits. In those seven innings Stevens struck out six, while mixing up his pitches, never giving the Marauders any chance to consistently produce runs. After a quality start from the starter, Coach Painton went to his bullpen to close out the win. In relief Cain Roberts and Omar Gamboa both pitched scoreless innings, closing out a second win on the day for the Renegades.

“I felt like the 2-3 run innings, we were able to string some hits together, which we haven’t done in every ballgame. Both of the bullpen guys are coming off of injuries, and they both stepped into the game and did a good job,” said Painton.

BC was able to finish the sweep of Antelope Valley by beating them 6-1 in the final game of the series on April 2.

BC starting pitcher Austin Toerner picked up the win. Toerner pitched seven innings, giving up only one run on five hits while striking out five. Potter pitched two scoreless innings of relief.

Two weeks before the sweep of Antelope Valley, BC lost two out of three games against Glendale College.

The Renegades lost the first game against Glendale 5-3 at Gerry Collis Field on March 15. “We didn’t compete for seven innings. We kicked the ball all over the field. We showed up to play instead of to compete. At one point, we had more errors than they had hits and they were winning 3-0. We really didn’t start doing a good job competing offensively until the seventh and eighth innings,” said head coach Tim Painton.

“I thought Hartley was awesome. He did a great job, and we had nothing really offensively to show for that,” said Painton.

Martinez went 3-for-5 with an RBI and also scored a run. Smith went 1-for-4 with two RBIs.

The Renegades scored their three runs in the last two innings. They also had six errors on defense.

BC won the second game against Glendale 6-5 on March 17. BC starting pitcher Monty Stevens got the win. Stevens pitched five innings, giving up three runs on one hit while striking out four and walking seven. Jason Potter picked up the save. Potter pitched four innings of relief, giving up two runs on four hits while striking out five and walking one.

Harley Lopez was the only Renegade who had multiple hits. Lopez went 2-for-5 with an RBI and also scored two runs. Jacob Herrera, Martinez, and Douglass all had RBI singles.

BC committed a total of 12 errors in the three-game series against Glendale.

Between the Antelope Valley and Glendale series, the Renegades played in the College of the Sequoias tournament over spring break, where they went 2-1.

BC started off the tournament by playing College of the Sequoias on March 22. BC went on to win 10-4. BC starting pitcher Hudson Hartley picked up the win. Hartley pitched eight innings, giving up four runs on 11 hits while striking out three. David Carter pitched a scoreless inning of relief.

The Renegades went on to lose against Reedley College 12-4 in their second game of the tournament on March 23.

BC’s starting pitcher Trenton Taylor got a no-decision. Taylor pitched four innings, giving up two runs on two runs while walking three. Parsons got the loss for BC. Parsons pitched 0.2 innings, giving up five runs on four hits. All five of BC’s pitchers combined to give up 11 hits and they also walked nine batters. Lopez went 2-for-3 scoring two runs. Hallum went 2-for-4 with an RBI. Caleb Hewes went 1-for-3 with two RBIs.

BC went on to beat Saddleback College 4-3 in their final game of the tournament on March 24. Saddleback was on a seven-game winning streak coming into the game.

BC starting pitcher Monty Stevens got a no-decision. Stevens pitched seven innings, giving up three runs (1 earned) on three hits while striking out two and walking four. Toerner picked up the win. Toerner pitched two scoreless innings of relief giving up only one hit.