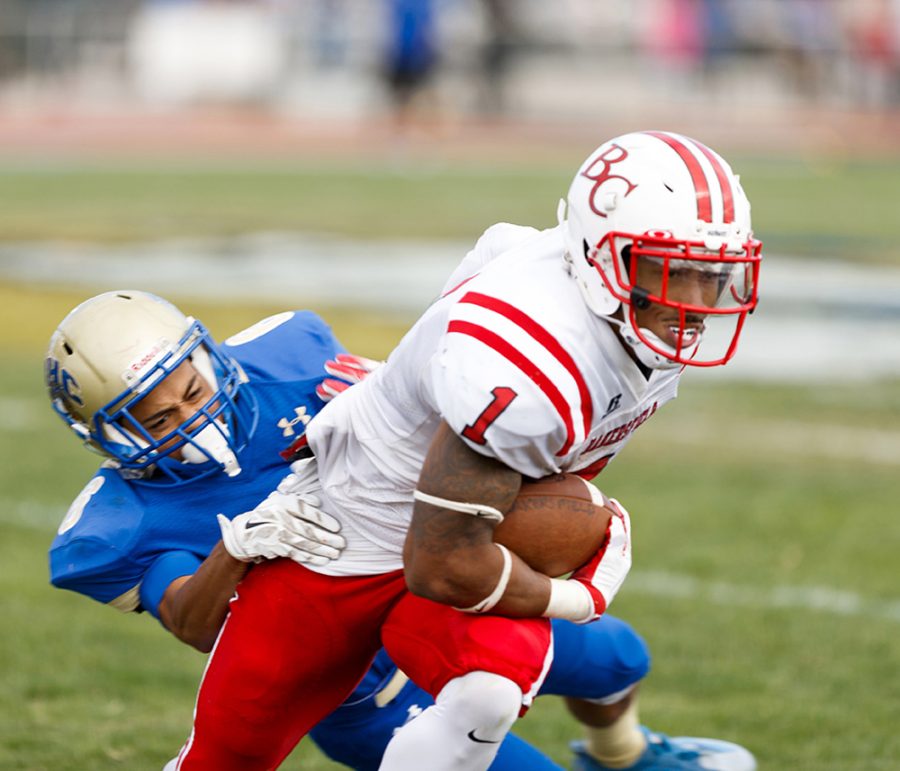 After a disappointing season last year that saw his team go 2-8, Bakersfield College football head coach Jeff Chudy is looking to have a bounce back year.

The Renegades (1-0) are already getting off on the right foot by winning their season opener against Allan Hancock College (0-1) 22-19, and also having a “good” scrimmage against Antelope Valley College.

“You always have high expectations going into a season and we’re going to take it one game at a time, but we’re always striving for a conference championship. We’re in a very competitive league and we have our work cut out for us,” said Chudy, who his entering his 13th year as head coach.

This year’s team is filled with a lot of young players, and it’s their first year playing at the community college level, but Chudy expects the freshman to have a big impact on the team.

“We have a huge freshman influx. We expect those guys to be huge contributors. We’re going to be playing with a lot of new faces, which is exciting,” said Chudy.

Chudy also said that it’s still early in the year, and he would know more about his team after the first game of the season.

“We had some guys that played for us last year and we had some guys that were hurt that had to sit out. As our roster completes itself, we’ll know more after our first game when guys get out there and get under the gun and see the live bullets,” said Chudy. “It’s always a challenge, first game of the year, and we’re going to be playing on the road a 3 o’clock game, which is unique. Normally we don’t play until later in the afternoon when we travel, so we’re going to have some challenges, but I’m excited because our guys have put in a really good summer and we’ve had a good fall camp so far.”

BC dominated Allan Hancock the entire first half and was up 16-0 at halftime.

After halftime, BC looked like a totally different team. They struggled to move the ball on offense and their defense started giving up big plays.

Allan Hancock scored 13 unanswered points in the fourth quarter to make it 22-19, but BC was able to hold on to get the win.

“I thought we did a really nice job early on. We didn’t take advantage of our opportunities early on in the first half. We created five turnovers and we only came away with 16 points, which is not enough,” said Chudy. “You play a team who’s playing at home and we figured out a way to lose momentum, which in football, is extremely tough to get back. We were fortunate enough at the end that we had a big enough lead and didn’t give it up. I’m proud of our guys, I’m not extremely happy with how we finished.”

Derrick Vickers seemed like the focal point of BC’s offense, rushing for 62 yards and 2 TDs. He also had 95 yards receiving and a nice punt return for 39 yards.

“He’s a playmaker. He did a nice job on the punt return and a nice counter right up the chute. I don’t know how many times he made guys miss on the edge, but it was more than five and it was probably double digits on how many guys actually missed tackles on him. We know how he is, we get to see him every day in practice and he’s a handful,” said Chudy.

Chudy felt that his young secondary did a really good job, considering there is only one sophomore playing in the secondary.

“We have one sophomore defensive back total. We’re playing with 11 freshman DBs and along the way you’re going to have a little bit of growing pains. I thought there were some really good plays made early on, but I don’t know what happened at the end, we just made some mental mistakes at the end,” said Chudy.

BC had a scrimmage against Antelope Valley on Aug. 26th and Chudy was really happy with the tempo his team was playing with.

“I thought we did some really good things after we got in the flow. We were going 15-play series, so our second series on offense we started getting into the flow of things and our tempo was really good,” said Chudy.

Chudy is ready to see how his team will play in the season opener against Allan Hancock College when it’s not a practice and they’re actually keeping score.

“We’re like most teams right now at this stage; we’re a work in progress. It’s going to be exciting to see how our guys respond on Saturday. The biggest thing to look at on Saturday is to see how guys perform under stress. It’s different than practice. It’s different than going against your teammates. Now we’re keeping score and there’s a meaning and a consequence with everything now. Obviously we’re not game 10 ready, we’re game one. There are a lot of unknowns,” said Chudy.

Chudy felt that getting 11 guys to come together and be on the same page was the main thing that his team needed to improve on going into the season opener.

The Renegades will host Chaffey College in their home opener on Sept. 10 at 6 p.m.