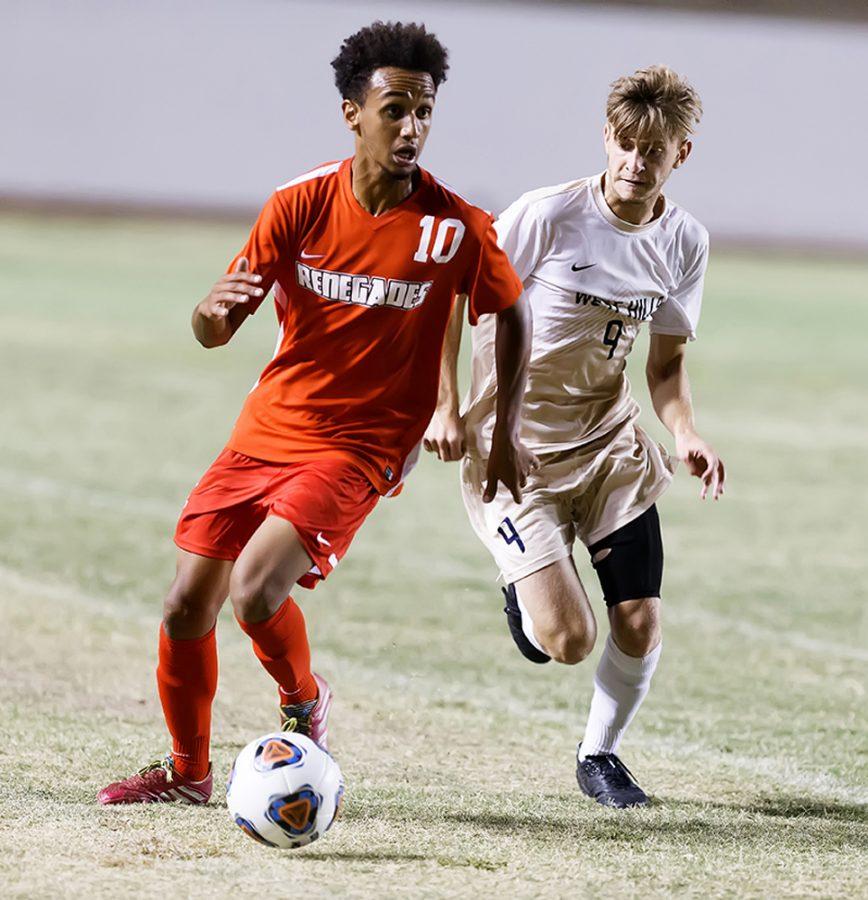 The Bakersfield College men’s soccer team started their first season this fall after almost three decades without a team. Coach Vayron Martinez is determined to build the program from ground zero and ready to lead the Renegades to a successful season.

Before accepting the job to coach here at BC, Martinez was the associate head coach of LA Mission College for four years, leading them to the semifinals on his final year. Martinez has had coaching experience 10 years before that, and when he got the offer of becoming the new coach of BC, he was ready to start this new program.

When asked about how he felt receiving the opportunity to coach this team and starting it from the ground up, he answered by mentioning how it means a lot to restart the program from scratch.

When the offer came to him, he felt very fortunate to get the job and he understands the meaning of soccer in this community. To him, Bakersfield is a “community hot bed for soccer that’s been yearning to have a men’s soccer team here at BC for a long time.”

Coaching at a new school and even starting up a new program would most likely make coaches nervous, but Martinez believes this challenge is a great thing for him and he knows that at “any time you’re representing something bigger than yourself, you’re obviously going to feel some pressure on you, but I’m confident that I’m capable of doing the job.”

When it comes to starting a new team, the first years can be a rebuilding process that will take time with a learning curve that could affect coaches and athletes.

With time, Martinez wants this club to have a solid foundation that will be stable not just for present time but as well for the future of this program to keep it going. He hopes that he will be working on this club for a long time and making history alongside with the athletes to make BC proud.

Having to start a whole new team will mean having new students meeting for the first time so his first goal is to build a culture between the players and making them aware that they aren’t representing their high schools anymore.

Martinez said they’re representing a larger community, which is the city of Bakersfield and to do that he believes they need to grow together as a team.

The players started practicing this summer to get ready for the season and Martinez talked about how his group of players are looking good,motivated and are competing to win a spot on the team, but even though they are competing for a spot, they all get along very well because they know they’re making history together.

When asked if he has any key players on the team, he replied by saying it’s too early in the season to point any players out that will win us games.

He said every player is working hard to earn their spot on the roster.

He also mentioned the transition from high school to college can be difficult.

“The pace is different here, it’s just getting used to that pace, getting used to the physicality of collegiate competition. They’re facing men out there, and some of these students are 17, 18 year olds playing against older players, so it’s not an easy transition, but once we get more games under us, it’s going to give us a picture of who we are this year.”

For Martinez, the goals for this season include winning the conference title. He said to do that the team knows they have to work hard all season to close and win games. “If we’re not striving to win a championship for BC than we shouldn’t be here,” he said.