BC football continues to find ways to win 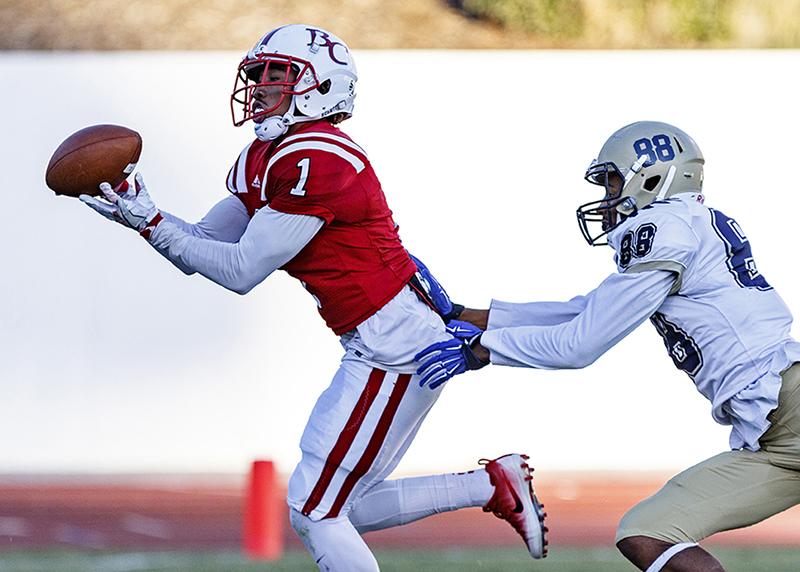 The Renegades got out to an early lead by scoring two touchdowns in the first quarter. The first touchdown came on a 1-yard run from Ferguson Ayers. LA Harbor (1-3) fumbled the opening kickoff and BC recovered. BC only had to go 12 yards on four plays to score. The next touchdown came on a 38-yard pass from Cesar De Leon to Derrick Vickers. The drive went 59 yards on three plays in less than a minute.

BC would then score again halfway in the second quarter on a two-yard run from La Meshio Hill. That score capped off a 10-play, 54-yard drive and would put the Renegades up 21-0.

De Leon got hurt late in the second quarter and would be replaced by Dalton Gallis, who has started every game so far this season for the Renegades. LA Harbor got on the board with a little less than three minutes remaining in the second quarter on a 27-yard field goal from Jorge Paz. BC would answer with a 21-yard field goal from Jacob Young with 20 seconds left in the first half.

There was only one scoring play in the third quarter and it came on a 13-yard pass from Gallis to Bowman to put BC up 31-3. LA Harbor would finally score a touchdown at the beginning of the fourth quarter on a 13-yard pass from Clayton Washburn to Jalin Scott. BC would then score later in the fourth on a 6-yard pass from Gallis to Vickers. LA Harbor would return the ensuing kickoff 93 yards for a touchdown. That would push the score to 38-17 and that would end up being the final score.

“Cesar’s got a lot of moxie and a lot of confidence and our players really respond to him well. He did well in practice and he deserved to start tonight,” said Chudy. “We got to play more consistent. We missed some tackles, we missed some sacks and gave up two big personal fouls on one drive that led to a touchdown. Then, we kick it off and we don’t do a good job covering. We got to eliminate those kinds of mistakes.”

“I think we’re trying to get to the point where our execution matches our effort. We have execution problems at times and we got to cut out the penalties; that is not characteristic of what we’re trying to do. We made some things happen early on and we capitalized on the energy,” said Chudy.

El Camino scored first on a 66-yard run from Johnnell Jackson. The drive started on the 1-yard line and the Warriors drove 99 yards down the field to score. BC answered with a 71-yard drive that ended with a 1-yard touchdown run from Ayers.

The next score came in the second quarter on a 4-yard run from Vickers. Seven minutes later, BC scored again on a 7-yard run from Hill to put them up 21-7. El Camino scored with a minute left in the first half on a 30-yard pass to Mason Mulvihill from David Sills, but they would miss the extra point. BC led El Camino 21-13 at the half.

The Warriors started the scoring in the second half on a 22-yard field goal from Sills. BC would answer with a 33-yard touchdown pass from Gallis to Vickers. El Camino would score about five minutes later on a 13-yard pass from Sills to Trevon Dean. The Renegades would score a minute later on a 3-yard run from Hill. BC led 35-23 going into the fourth quarter.

El Camino scored a touchdown with three minutes left on a 6-yard run from Sills to cut the score to 35-30.

They then kicked an onside kick on the ensuing kickoff and recovered. The Warriors then scored with 40 seconds left on a 20-yard pass from Sills to Zaire Andre. BC managed to drive 70 yards down the field in 31 seconds to score a touchdown with three seconds left on a 1-yard run from Vickers.

Gallis went 19-for-28 passing for 348 yards and one touchdown and one interception. Hill ran for 68 yards on 16 attempts and two touchdowns.

Vickers led the Renegades in receiving with 207 yards on nine receptions and one touchdown. He also had two rushing touchdowns.

BC has a bye next week before taking on Moorpark College on the road on Oct. 15.