Renegades hope to take 13-game win streak into the postseason 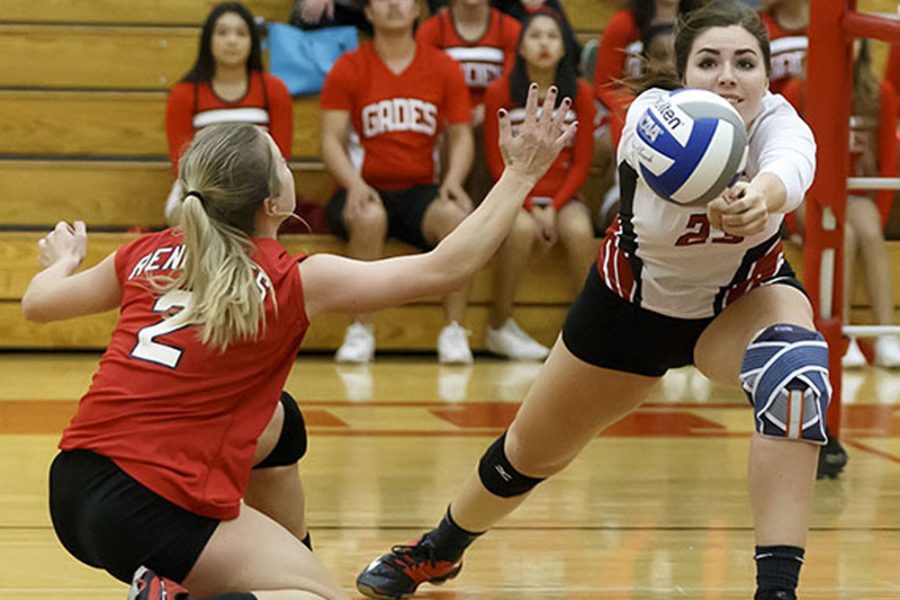 One game remains in the Bakersfield College women’s volleyball regular season schedule. The Renegades will face Canyons at the Gil Bishop Sports Center at 6 p.m. Nov. 16. The match is significant in helping to determine postseason seeding, and a chance for the Renegades to finish the regular season on a 13-game win streak.

This finale comes after a resounding victory against LA Mission College on Nov. 9. The Renegades battled in the first set of the contest, rallying from an early 5-1 deficit to outlast LA Mission 31-29. The Renegades took control early in the second set, on the way to a 25-15 victory after opening the set on a 15-8 run. The Renegades never looked back from a 3-0 start to the third set, converting a 22-8 blowout to a 25-10 victory, securing a 3-0 sweep.

The fans in attendance against LA Mission were pleased with the result, and had some fans excited for the finale, such as former Bakersfield College student Amanda Linares. “These ladies have had a fun year. They’ve been fun to watch, fun to follow, and I just can’t wait to see how it all ends this year,” said Linares. “I really hope I can make it out here for the last game. They haven’t played at home too much this season, and it’s important to me to support them.”

With a record of 19-8, the team appears to be a lock for postseason play, and an opportunity to contend for the state title. This might be amazing to some, considering the team went 2-5 to start the season. Yet coach Carl Ferreira’s message never changed, always focusing on the approach to the game, rather than its result, and the team has responded by going 17-3 since.

Statistically, the Renegades have been dominant through the final stretch of the season, winning 30 of 34 sets dating back to Sept. 24 when their winning streak began. Through 27 total matches, the Renegades are averaging 11.99 kills per set, 11.73 assists per set, and 13.80 digs per set.

Conference play has only seemed to invigorate the Renegades as their points per set have increased a full 2.3 points throughout their 7-0 conference record. Yet this final game will stake the most interest in the Renegades postseason run, as it is the final game that can determine where the team will begin its postseason journey.